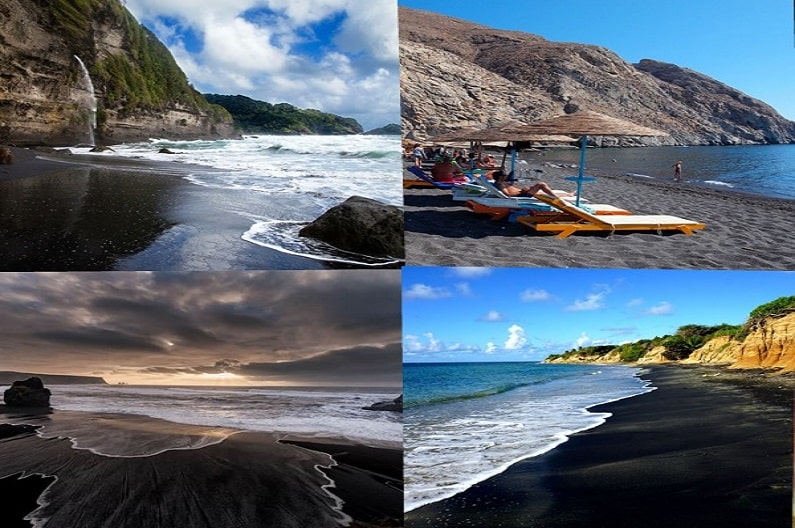 Black Sandy Beaches, especially seen in countries where volcanic events are actively observed, surprise those who see them. The black sand, which is the result of the interaction of hot lava and sea salt, is not suitable for sunbathing as it absorbs the heat too much. Despite this, black sand beaches attract attention, especially from tourists.

Punaluʻu Beach is a beach between Pāhala and Nāʻālehu on the Big Island of Hawaii, USA. The beach has black sand, which is made of basalt and created by lava flowing into the ocean and erupting as it reaches the sand. You can swim on the beach and watch sea turtles. However, it is forbidden to take black sand from the beach as a souvenir. 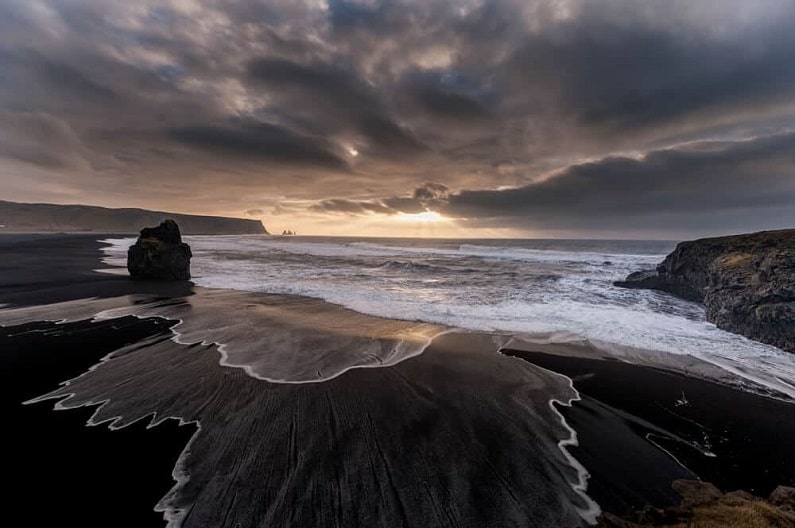 Vik beach, which is formed by the mixing of hot lava with ocean water, is located on the southern coast of Iceland. Vik beach is 110 km from the capital Reykjavik. 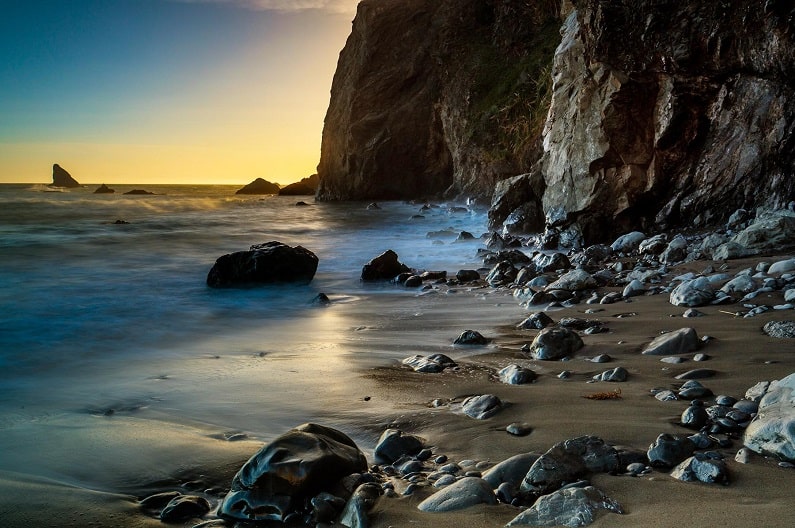 Black Sands Beach is the southern end of a long, 20-mile walkable stretch of coastline between the town of Shelter Cove and the Mattole River Campground. Usually preferred by surfers, the beach is 9 km long and is located in northern California.

*** You may be interested in;  Top 9 Mysterious Places to Visit in the World 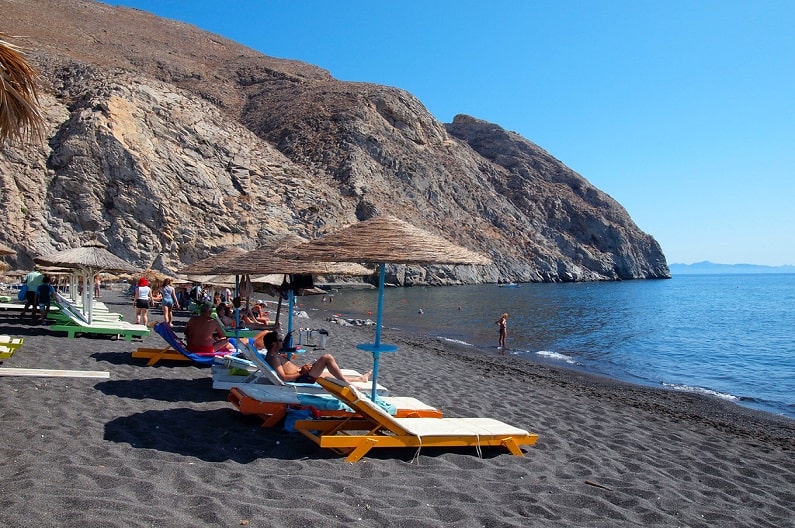 Santorini is not only famous for its whitewashed cave houses and blue-domed churches that dot the rim of its old volcanic crater, but it also boasts exceptional black sand beaches like Perissa. The black sands like midnight are sprinkled with shady palapas

, in contrast to the shimmering white houses and sparkling blue waters. 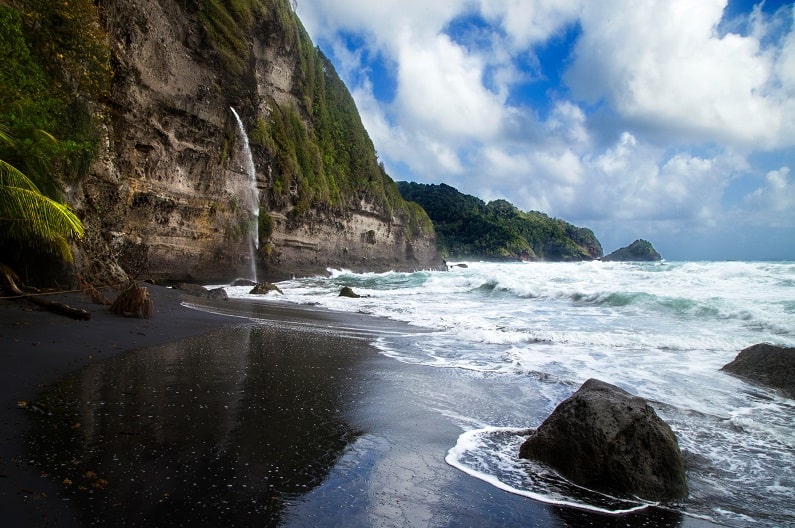 Dominica is often referred to as the “Nature Island in the Caribbean” thanks to its outstanding lush landscape, including pristine rainforest, volcanic hot springs, 365 rivers, and numerous waterfalls. 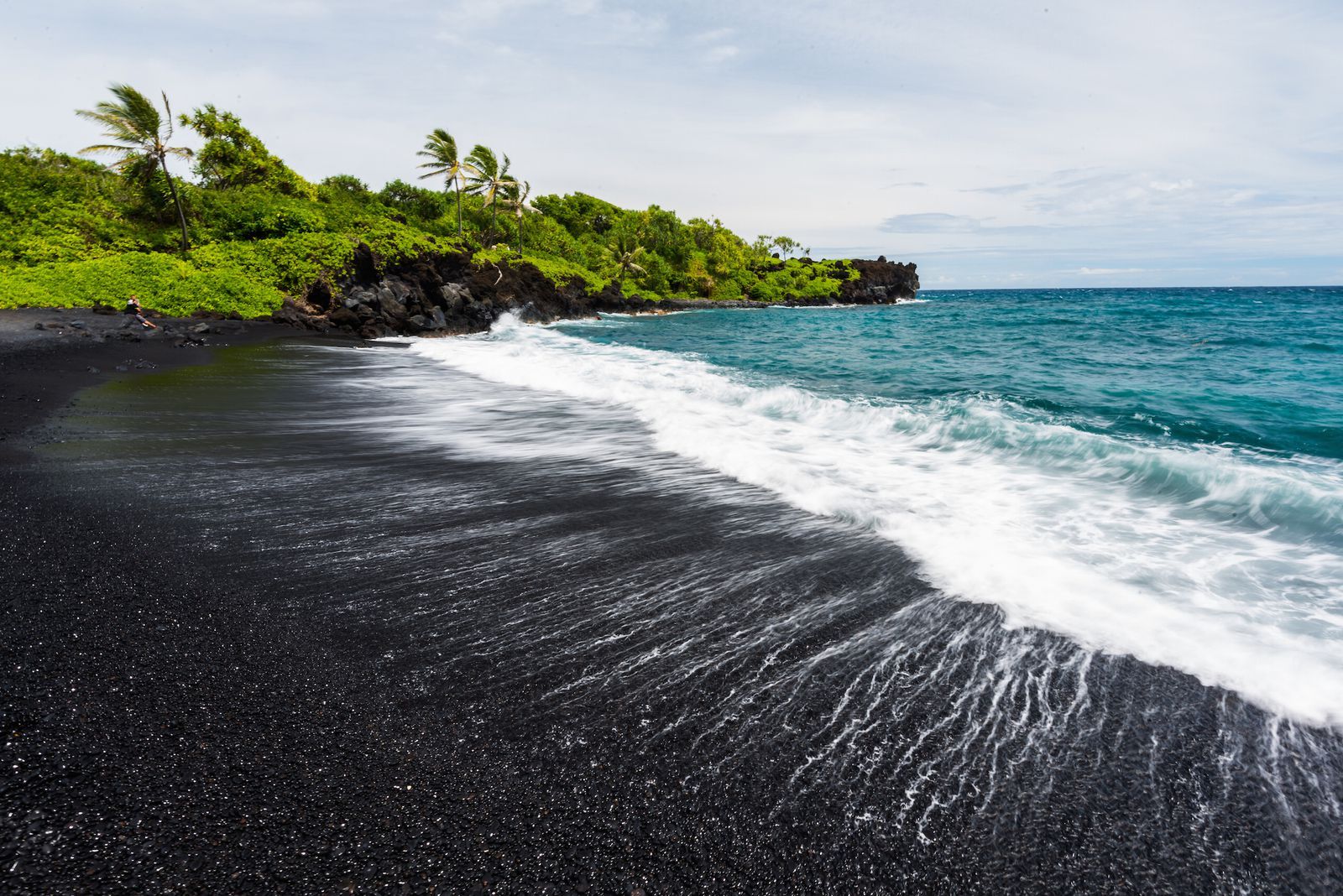 While not known for its white-sand beaches, it is home to Number One Beach, a stunning volcanic, black-sand beach with a thick palm floor and surrounded by the gorgeous cliffs featured in the Pirates of the Caribbean movies. Although you will need to hike for 15 minutes through the muddy forest to get there, it is definitely worth the effort.

*** You may be interested in;  Top 13 Reasons to Visit New Zealand 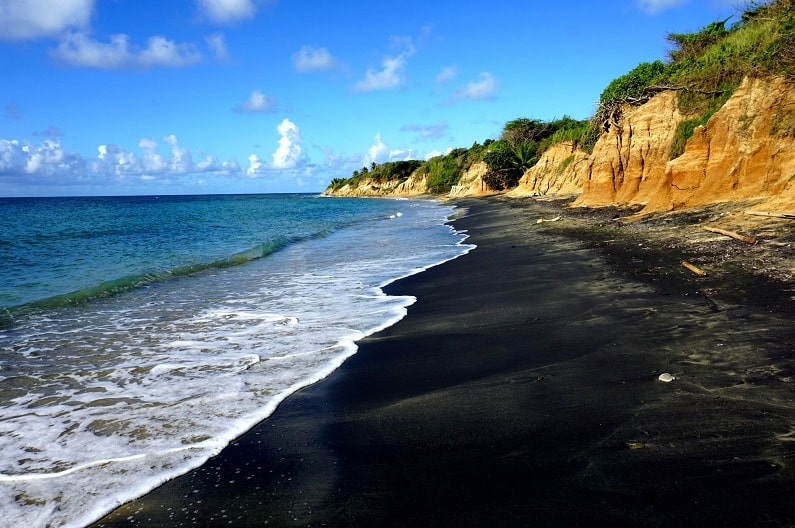 Vieques is often ranked among the most romantic islands in the world, located off the coast of Puerto Rico. After a 10-15 minute walk, you’ll find Playa Negra, which literally turns it into black sand, an isolated backwoods beach where the island’s wild horses want to hang out. The beach also has contrasting golden sands that add to its charm. You can also visit the rare bioluminescent sheep while you’re here. 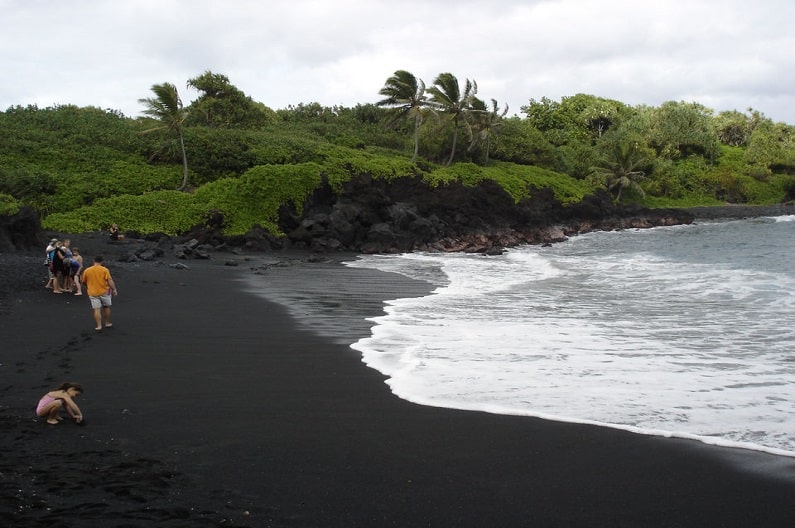 It is a popular place to camp in Prince William Sound. It will give you an insight into how enormous the surrounding glaciers and mountains are. With water flowing down overhanging glaciers, marine life playing among icebergs, and the dominating view of the Barry Arm, Black Sand Beach is one of Alaska’s most spectacular beaches. 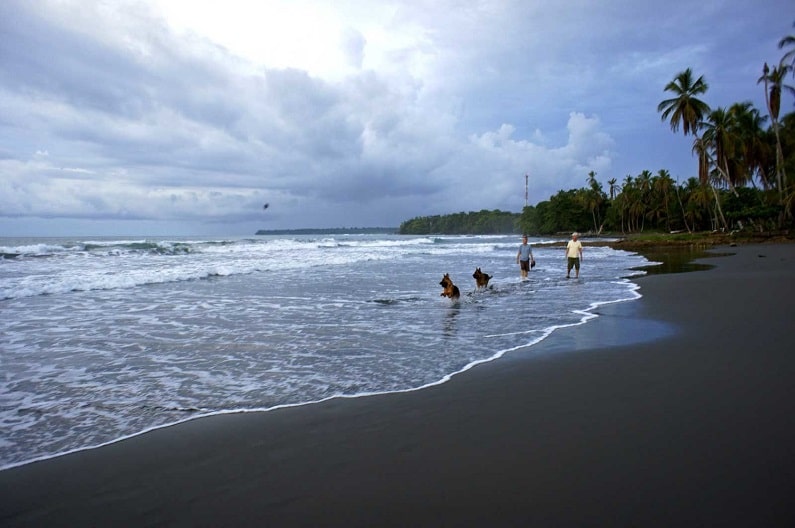 The beach, which was formed as a result of volcanic events, is one of the frequent destinations of surfers with its big waves. 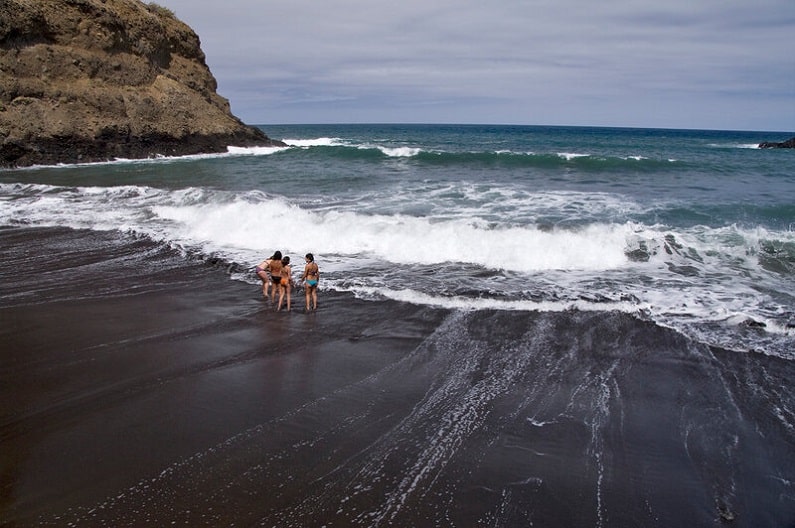 Santa Domingo Beach, which is worth seeing with its black sand and deep blue sea, is one of the most touristic areas of the Philippines. 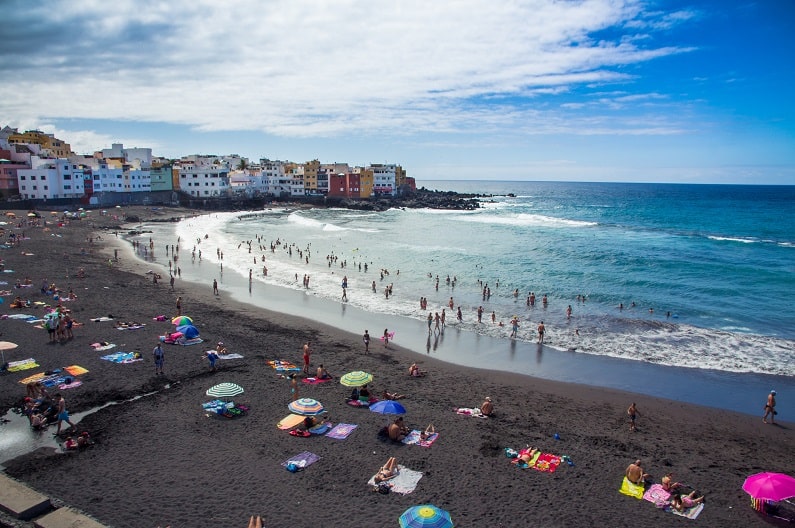 Playa Jardin is located in Tenerife in the Canary Islands and is considered one of its most impressive beaches. Cerulean waters gently stroke fine black volcanic sands lined with gently swaying palm trees and colorful botanical gardens.

Meaning “Garden Beach”, this beach not only has beautiful flowers and rich plant life but there’s even a waterfall for picture-perfect photography.