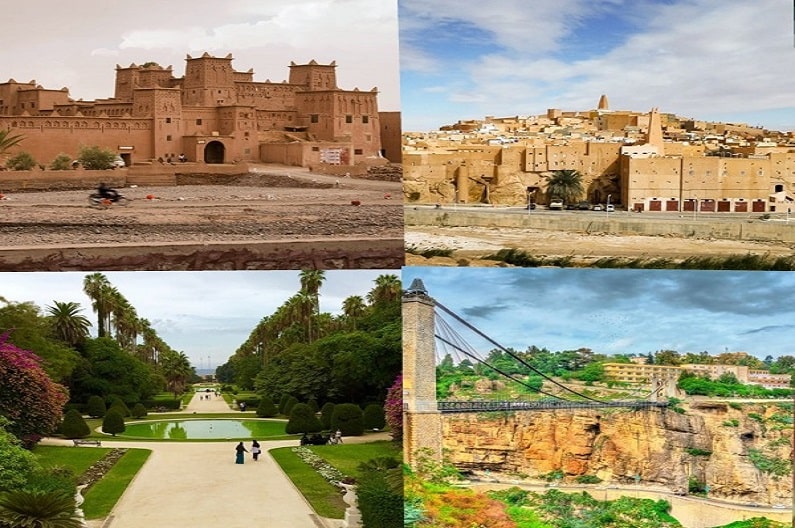 Algeria, which is the second-largest country in the African continent with an area of approximately 2 million 300 thousand square kilometers, has a very rich cultural texture as it has been under the domination of countries such as the Ottoman and France for many years. It is bordered by Tunisia in the northeast, the Mediterranean Sea in the north, Niger and Mali in the south, Libya in the east, and Morocco in the west, and Mauritania in the southwest.

This country, which arouses admiration with its historical buildings in its big cities such as Constantine, Oran and Algeria, its magnificent beaches, its nature where you can see the most beautiful shades of green, and its colorful streets, is one of the popular travel routes for those who love to make cultural trips with its exotic atmosphere. Here are some of the must-see tourist attractions in this African country. 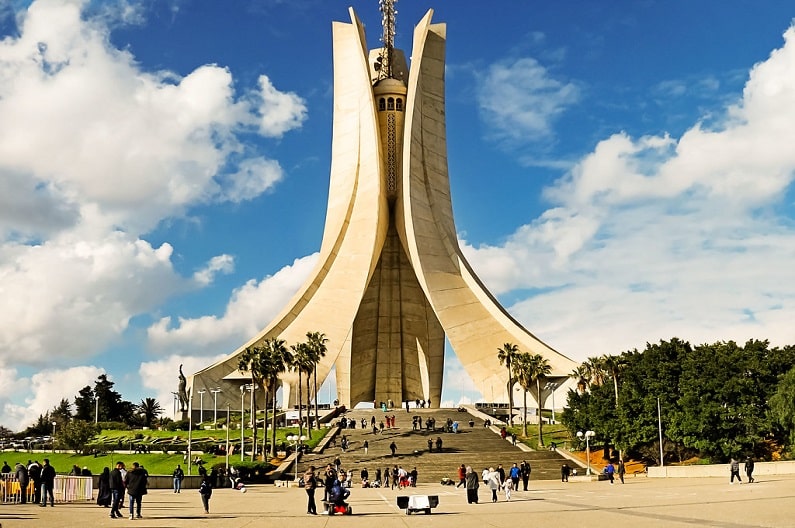 The Martyrs’ Monument, built-in 1980, was built in memory of the soldiers who lost their lives in the Algerian-France war. You can easily see the monument, which was built on one of the highest points of the city, even from afar. This building, which you can visit between 08:00-19:00, is worth seeing with its different design! 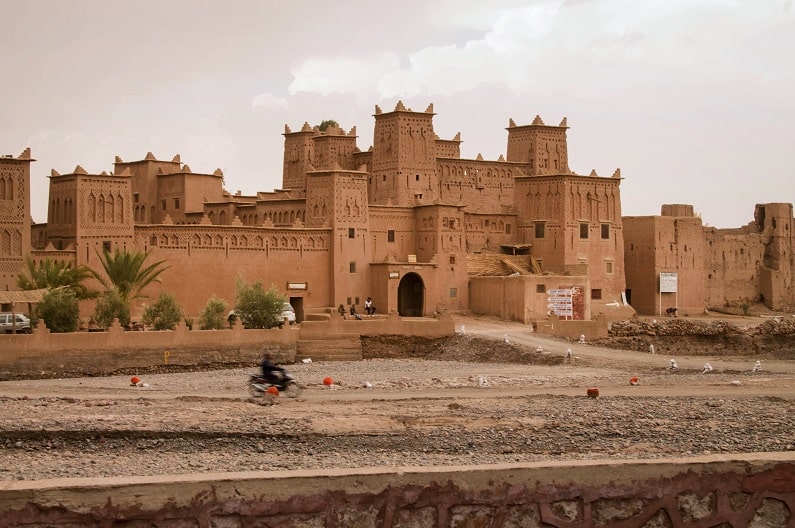 Located in the city of Algiers, famous for its impressive Ottoman and French-influenced architecture, Kasbah is one of the most visited places in both the country and the city. The establishment of the Kasbah, which is located on one of the highest points of Algeria, which is the capital of the country, and surrounded by walls, dates back to the 1516s. Kasbah is also on the UNESCO World Heritage List with its historical buildings and mysterious narrow streets.

*** You may be interested in; The 7 Great Reasons to Discover Cuba 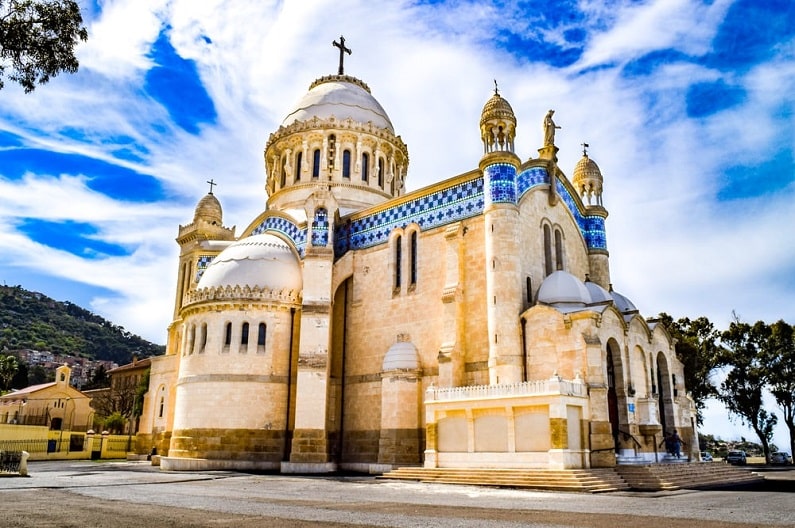 Located in the Bouzareah hills of Algeria, Notre Dame Cathedral is a magnificent cathedral built by the French in 1872. The domes of the cathedral, where you can see the Neo-Byzantine architecture, are designed in a round shape and impress with their wonderful appearance when the sun hits the selected sand color. You can visit the interior of the cathedral as well as watch the magnificent Mediterranean view from the Bouzareah hill, where it is located. 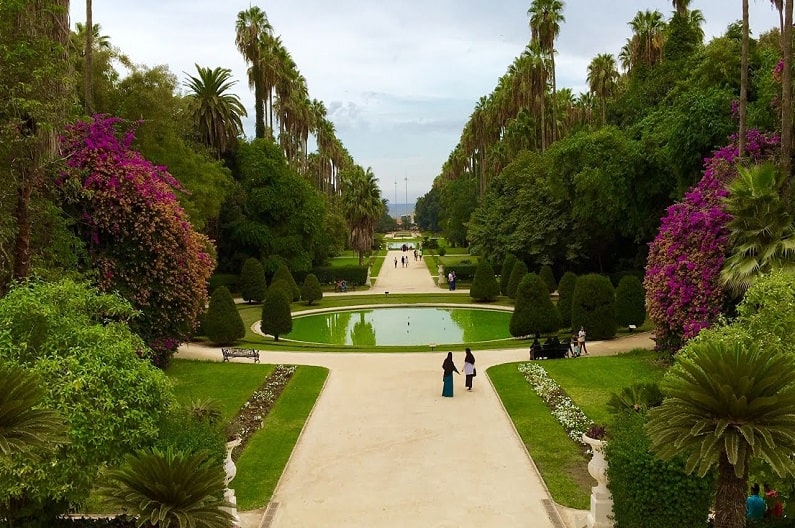 Designed in 1832, Hamma Gardens is located on an area of 58 hectares, in a pleasant spot where you can see the sea. The botanical garden, created by bringing together different plant species, draws attention with its colorful flowers and regular landscape. We recommend you to sit in the garden with about 1,200 different plants and watch the Algerian landscape. 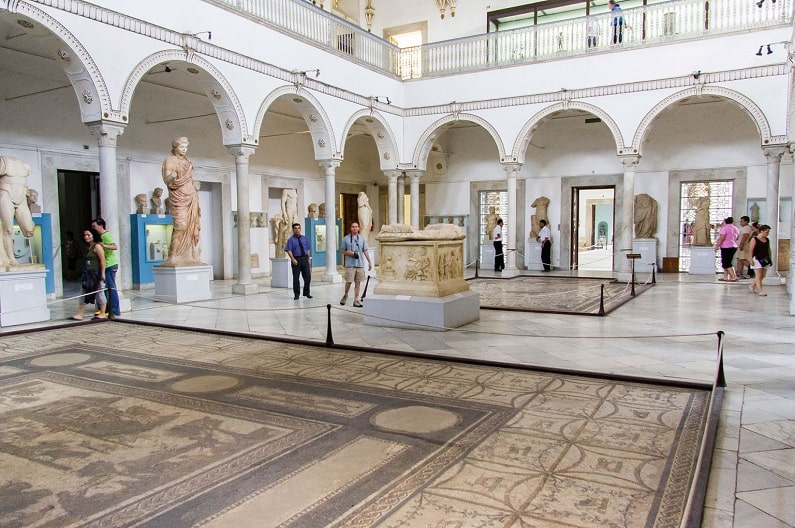 The house, which was built as a summer residence in the 18th century, was turned into a museum in 1930 and made available to the public. If you visit the Bardo Museum, you can examine the archaeological finds of Algeria and see the cultural and ethnographic items. You can visit the museum every day except Fridays. 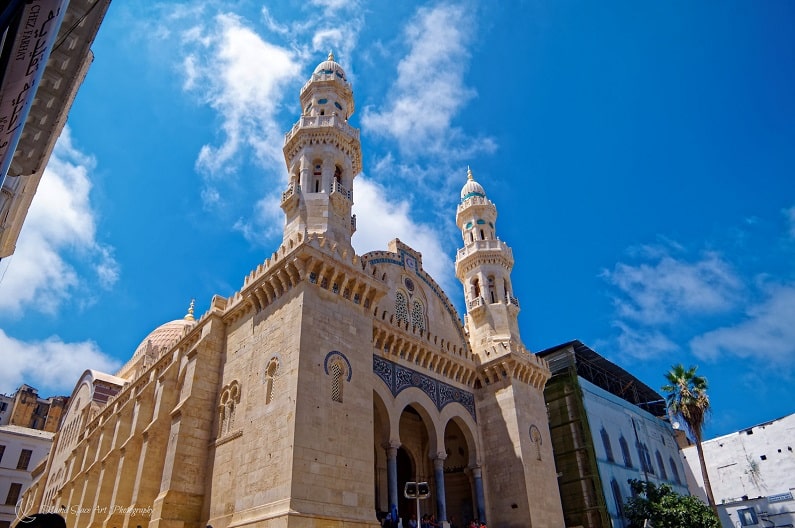 , which was converted into a mosque after a series of changes, was built in 1612 during the Ottoman Period. In addition to being very impressed with its exterior decorations and interior architecture, the mosque is among the most important touristic spots of the Kasbah region. 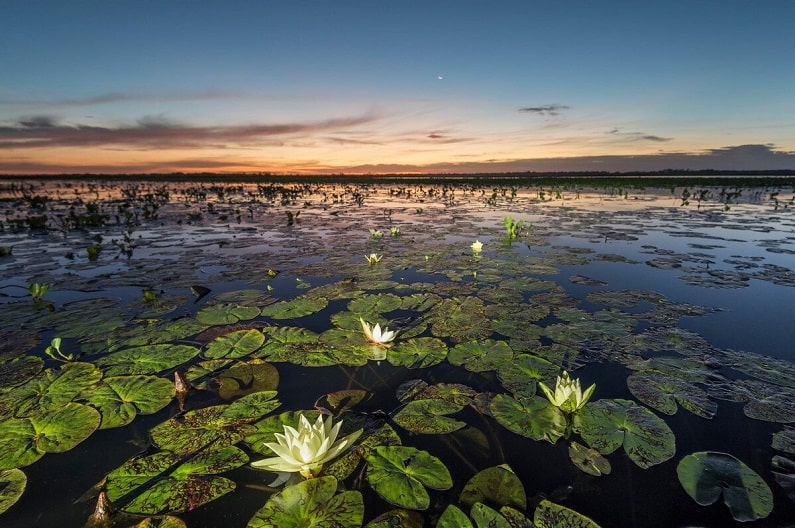 Located in the northeast of the country, El Kala Park is a special area in Algeria where rare plants and animals live. This park, where 40 species of mammals, 25 raptors and 9 seabirds live, is visited by 30,000 people a year. You will feel yourself in a unique ecosystem when you visit the national park, which was established at a point away from the highway to ensure the safety of living things. 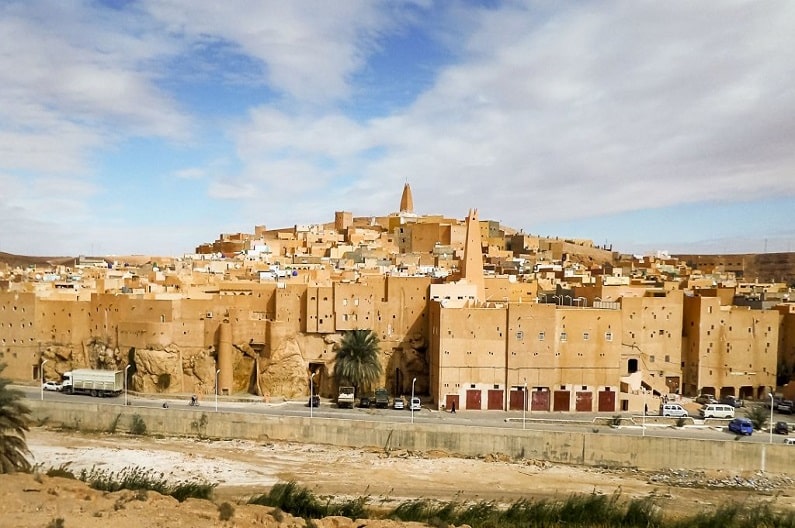 M’Zab, which was inscribed on the World Heritage List by UNESCO in 1982, is an important region of people who have managed to continue their lives in harmony with the environment. Located in the Sahara Desert, this valley is a special area with a population of 360,000 that has managed to remain natural. While visiting the city, you can witness both how people are structured and how they adapt to life intertwined with nature. 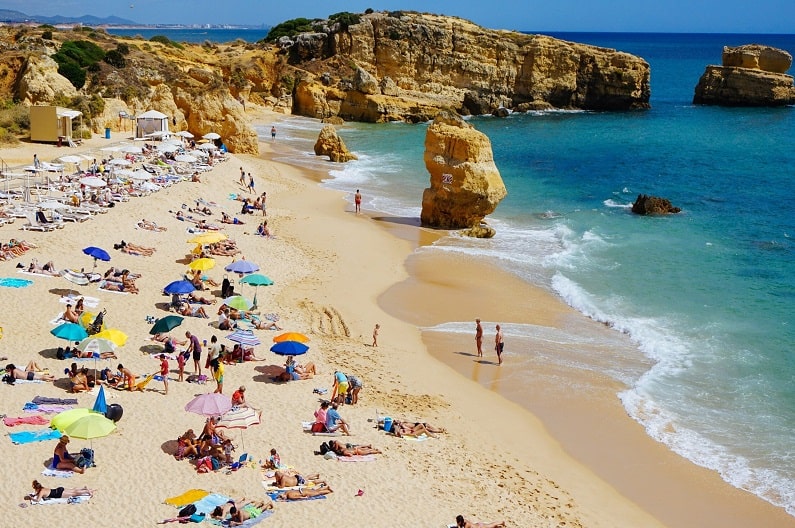 The most famous holiday destination of the city of Oran, which hosts impressive beaches such as Ain El-Turck, Bousfer, Mers El-Kebir, Corales, Les Andalouses, is El Bahia Beaches. If your purpose of visiting this country is to benefit from sea, sand, and sun tourism, do not neglect to swim in the deep blue waters of El Bahia Beaches and feel the peaceful and clean air. 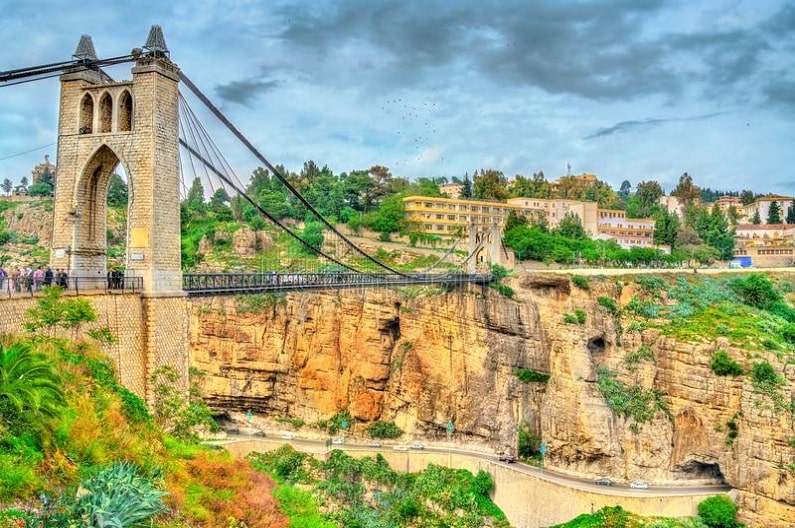 Gantt El Hıbal (Sidi-M’Cid) is one of the highest suspension bridges in the country and the world, with a height of 175 meters. Located in the northwest of Algeria, in the city of Constantine, known as the ‘City of Bridges’ with its famous structures such as Sidi Rached, El-Kantara Bridge, and Rhumel Bridge, Gantaret El Hıbal is a point worth seeing with its impressive architecture as well as its unique city view. 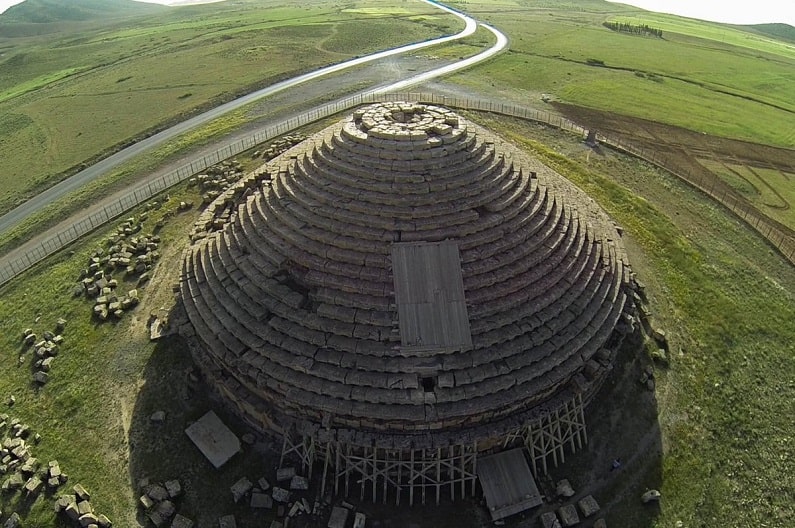 Madghacen, also spelled Medracen or Medghassen, is the royal mausoleum temple of the Berber Numidian Kings, located near the city of Batna in Aurasius Mons in Numidia, Algiers. Located near the Algerian city of Batna, Madghacen was built between 300-200 BC. The building, which was built as a mausoleum, is among the important historical structures that have survived from those days.

*** You may be interested in; Spain’s Historic City Seville Travel Guide