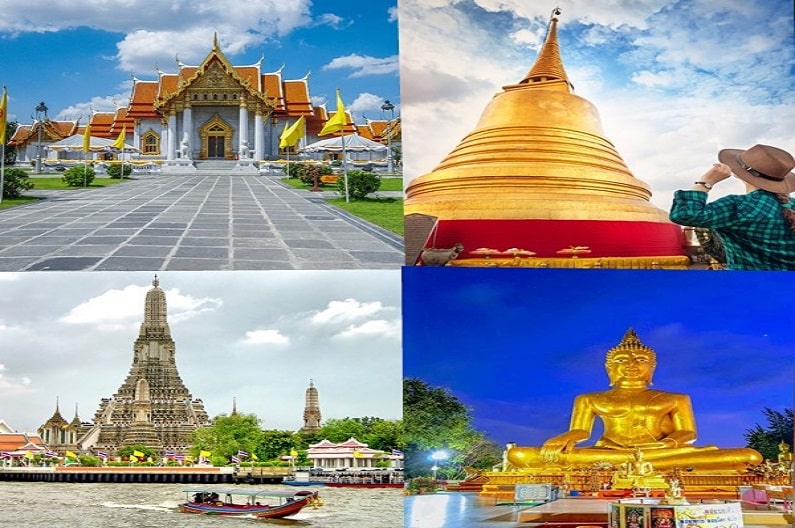 Bangkok welcomes more visitors than any other city in the world, and it doesn’t take long to understand why. Thailand’s capital, Bangkok, is a large city known for its ornate temples and vibrant street life. The boat-filled Chao Phraya River feeds the network of canals that run through the royal district of Rattanakosin, home to the imposing Grand Palace and the sacred Wat Phra Kaew Temple.

Food is another highlight of Bangkok, from local food served on modest street stalls to upscale cuisine at romantic rooftop restaurants. Luxurious shopping malls, boutiques where you can pamper yourself without spending too much, and beautiful markets are places where you can see. Extravagant Luxury hotels and surprisingly inexpensive serviced apartments welcome you with the same famous Thai hospitality. No visit to Bangkok is complete without a glance at its famous nightlife. 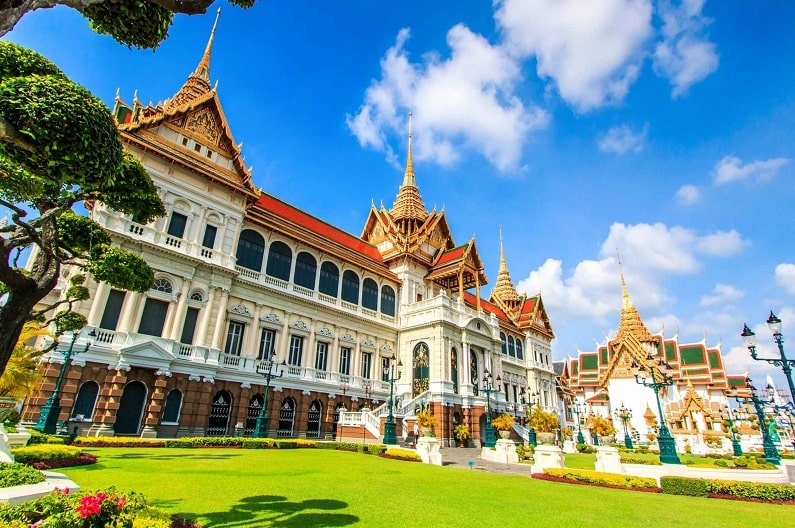 The Royal Palace, which is one of the must-see places in Bangkok, is also of great importance for Thailand. The complex, which has been home to Siam, the Kingdom of Thailand since 1782, consists of 3 parts. There are around 100 buildings, the outer and middle parts of the area that can be seen and visited, the inner part is the royal private area. Wat Phra Kaew, one of Thailand’s most important temples, is located in this magnificent palace.

*** You may be interested in;  The 15 Most Beautiful Palaces in the World 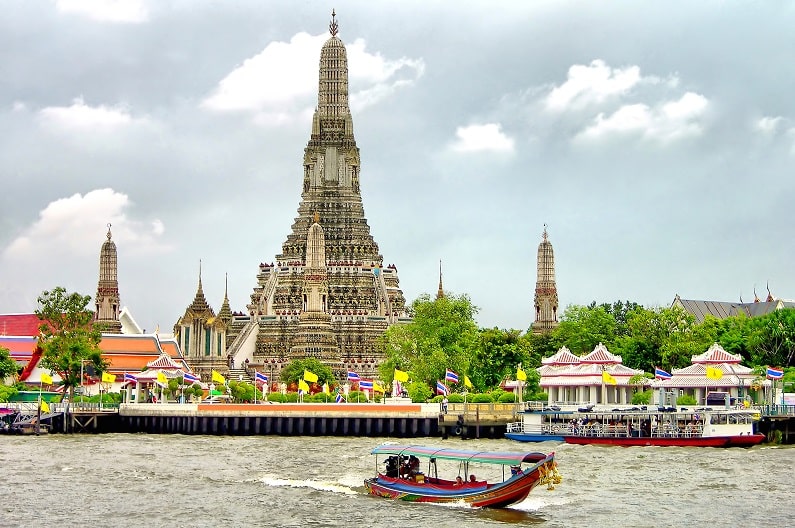 The temple, named after the Hindu God of Dawn, Arun, was built on the opposite shore of the Great Palace. The magnificent tower in the middle of the temple adorned with Chinese porcelain and ceramics is 82 meters high. There are four small towers on all four sides of this main tower: these towers represent four different winds, and the statue on the top of the main tower represents the wind god Pai. It is definitely one of the must-see places in Bangkok.

*** You may be interested in;  10 Most Beautiful Bridges You Must See in Europe 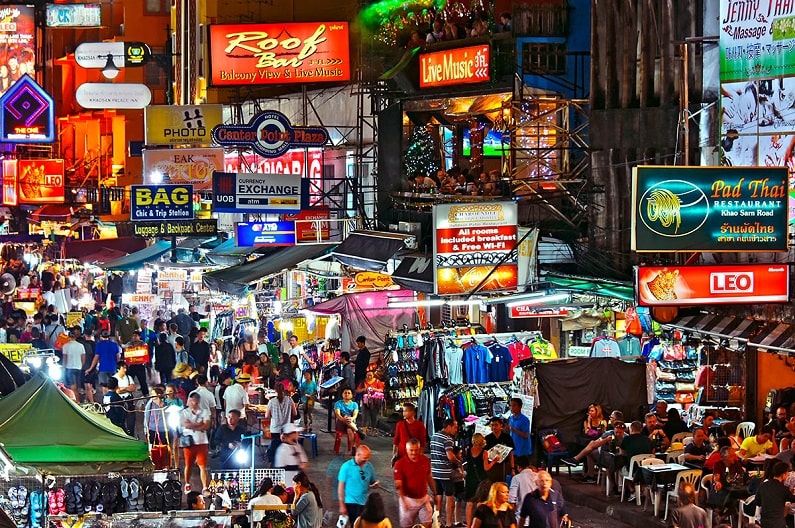 This is literally the meeting point of travelers. People from all corners of the world who come to visit Thailand and discover its culture and spirituality stay around this street. In this region, you can fill your stomach with magnificent traditional dishes, buy souvenirs for your spouse and friend, and even shop for yourself. In short, if you are going to shop in Bangkok, this is the place. Movement is never missing in Khao San Street, all you have to do is let yourself go to this flow! 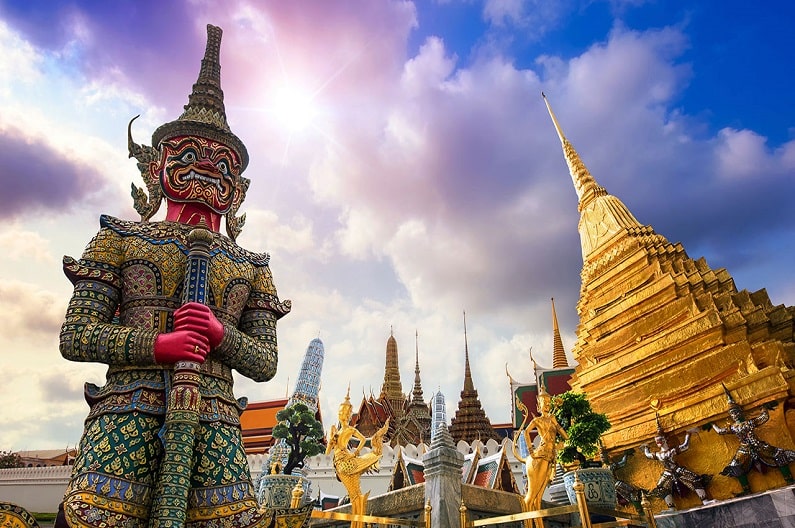 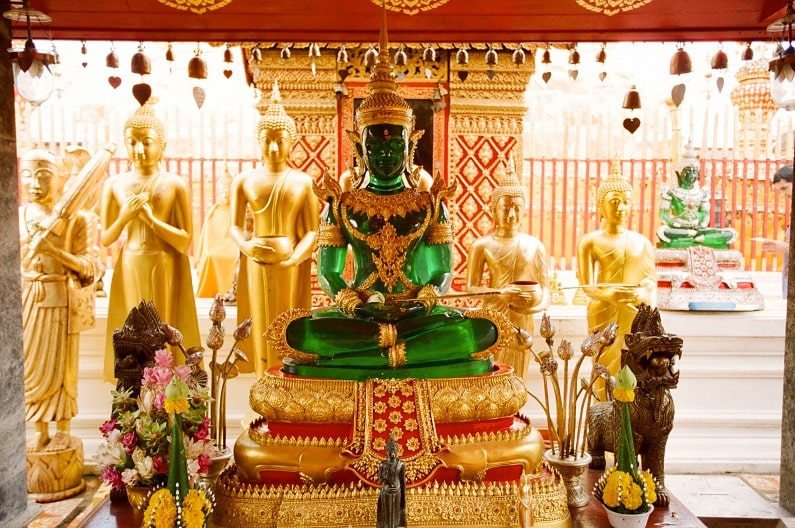 The temple has 3 doors, one of them in the front is made for visitors to enter and the other to exist, and the third door in the center is for the King and Queen. Also, let’s say that only the king can approach the Emerald Buddha.

*** You may be interested in; 5 Magnificent Temples to See in the Far East 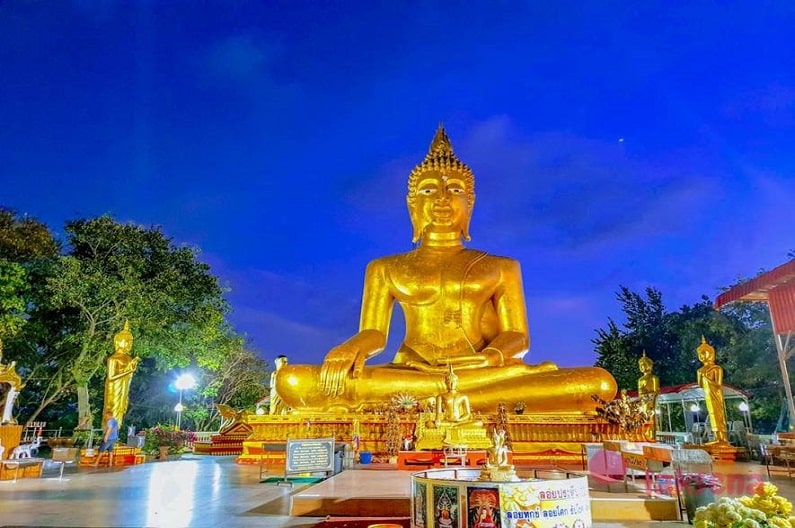 Wat Tramit, where the world’s largest golden Buddha statue is located, is one of the most tourist attractions in the city. This precious statue, dating back to the 13th century, was covered with plaster in order not to stand out and not to be stolen in a period when the country’s government was weakened, but it was forgotten in time that the statue was made of gold. While the statue was being transported to Wat Tramit in 1955, it fell to the ground and the Golden Buddha emerged with the cracking of the plaster. 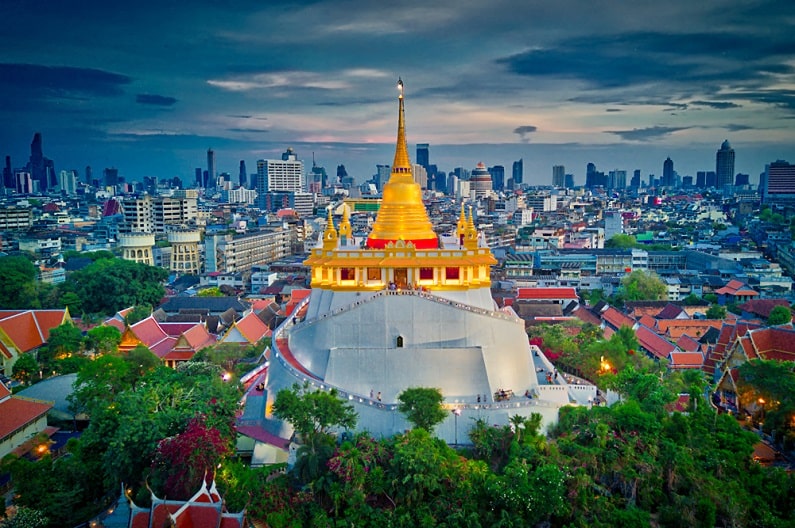 The Golden Mountain Hill actually collapsed over the previous temple while its golden roof was built and this depression remained there for half a century and became a hill with the help of nature. The new version of the temple, which was built during the Ayutthaya Kingdom, was completed during the reign of King Rama V, and a Buddha statue from Sri Lanka was placed inside. 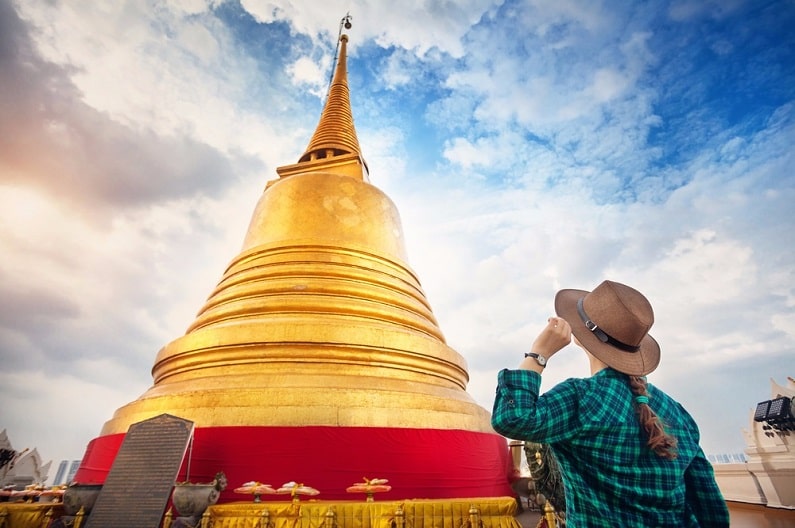 We recommend that you add this hill to your to-do list in Bangkok. You can watch the panoramic city view from the Golden Mountain, where the temple, which is renewed and stands upright against history, is located. 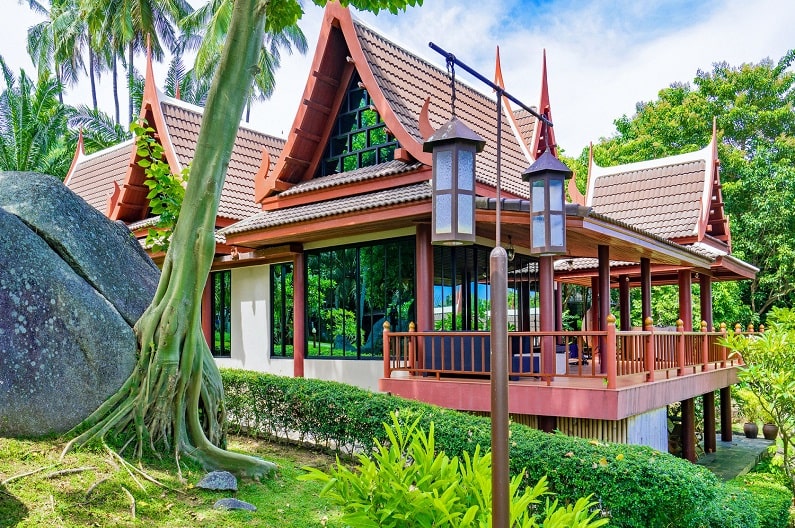 Jim Thompson House is among the places to visit in Bangkok. Thompson, an American businessman, and architect, founded this museum house himself in 1959. Jim Thompson, who discovered the Southeast Asian culture and art when he came to Bangkok in 1948 and founded a silk company, has accumulated artworks and items belonging to this culture in his home for years. In addition to the wooden houses built in 6 different Thai house architecture, the plants and trees in the garden also contain the exoticism of the region. 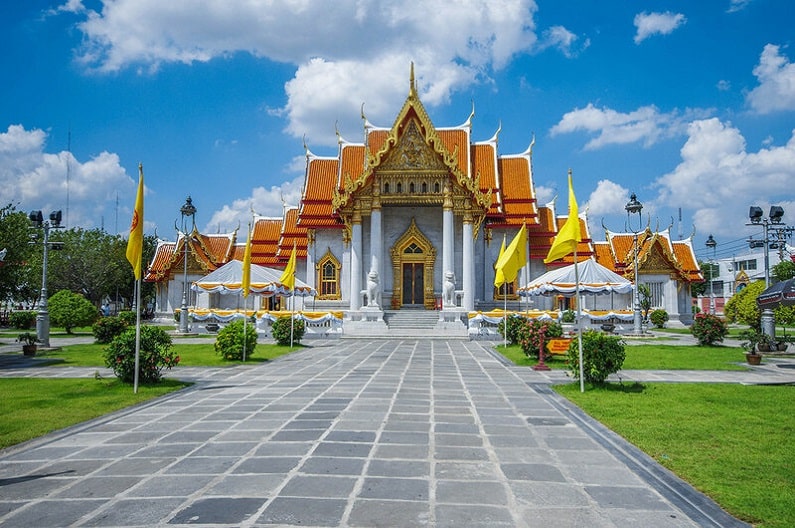 The neat and enormous Dusit District is a royal district that was formed in about 20 years at the beginning of the 20th century. There is Ananta Samakhom Throne Hall on one side, Vimanmek Mansion on the other, and Dusit Zoo on the other. The idea of creating the region came to King Rama V in 1897 when he went to visit the kingdoms in Europe and saw the palaces there, and on his return, he bought this area and started the work. It is indeed a lush and pleasant area to see in Bangkok. 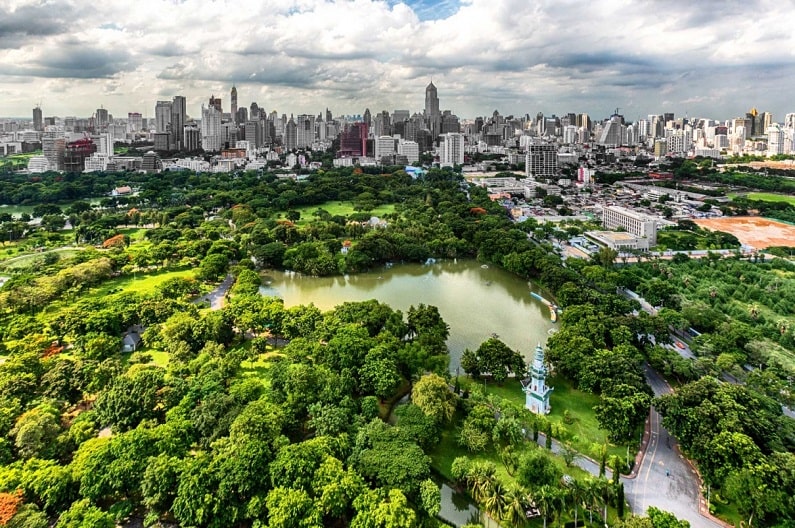 The park, named after Lumbini, the birthplace of Buddha in Nepal, offers many different activities for the public and tourists. King VI. Founded by Rama in the 1920s, the park was a base for Japanese soldiers during World War II. 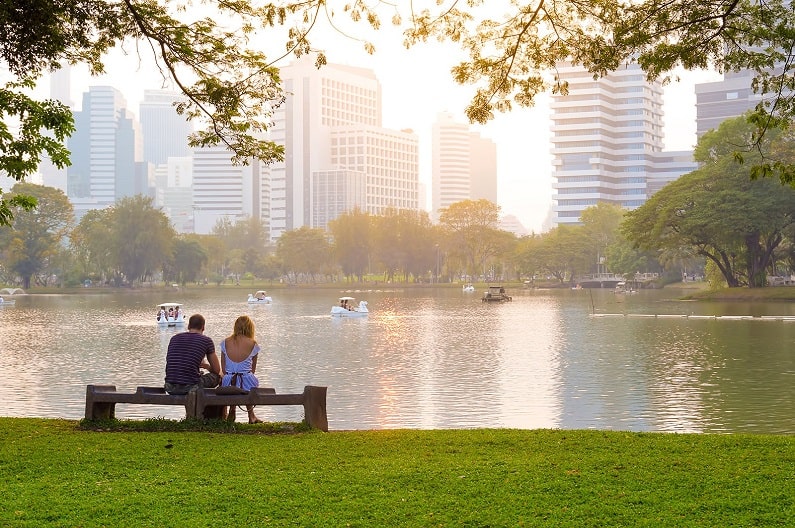 Although it is open to the public today, the rules must be followed: for example, dogs are not allowed in the park, and cycling is not allowed except from 10 am to 3 pm in the daytime. But you can always relax by the artificial lake while watching the towers of the city.

*** You may be interested in;  The 10 Most Beautiful Botanical Parks in the World 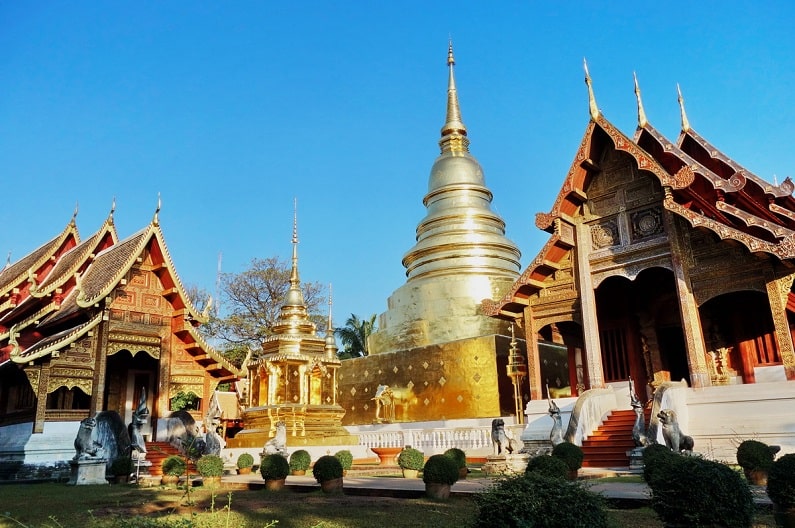 Wat Pho is one of the oldest temples in Bangkok, whose construction dates back to the early 16th century. Another important work in the place where a lot of training is given from Thai medical teaching to Thai massage is the giant Reclining Buddha statue.