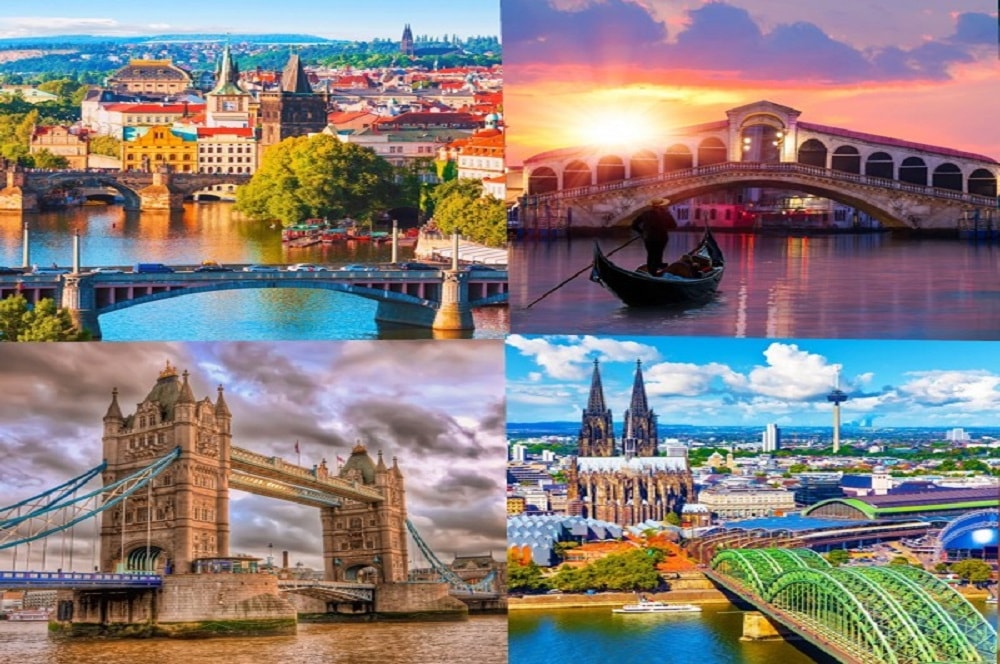 Bridges, each of which is an engineering and architectural wonder and which we can call the most beautiful bridges in the world; Throughout history, they are also structures that connect not only two separate lands, but also borders, different cultures, and civilizations. Some are from the Middle Ages, some are modern; some are completely built with natural materials, some are all steel!

Beautiful bridges in Europe are definitely worth seeing. Europe, which has the richest architectural history in the world in terms of both quality and quantity, has crossed the rivers almost everywhere with magnificent architectural designs and necklaces like bridges for centuries. Here are some of the most impressive bridges of Europe’s most beautiful cities. 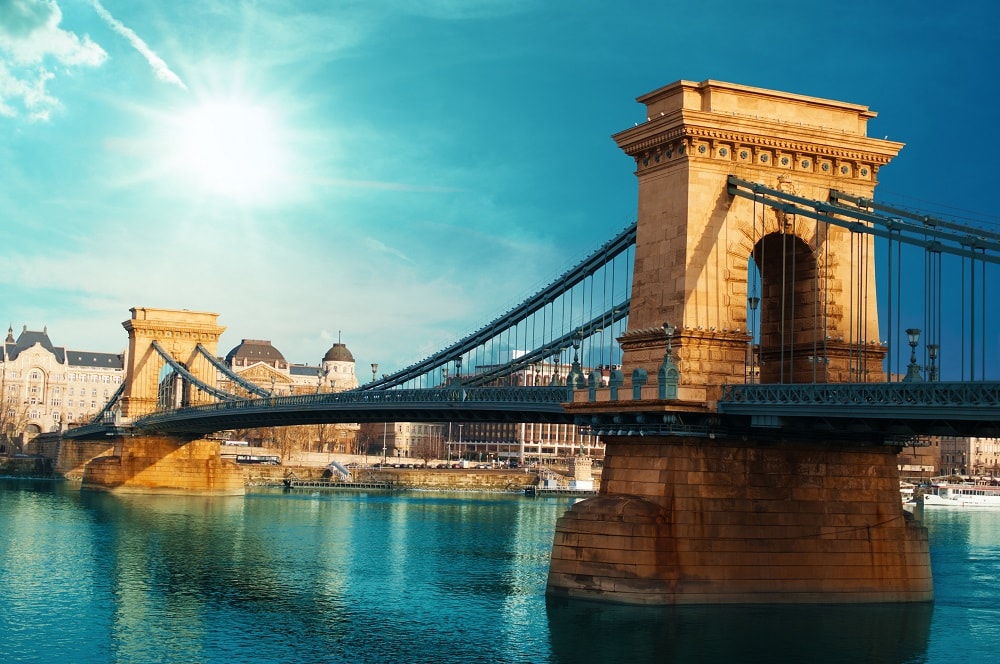 When it comes to Europe’s most beautiful bridges, the first city that comes to mind is definitely Budapest. The bridge, which has been in service since 1849, is 375 meters long and 16 meters wide. The length of the chains from which the bridge is named is 48 meters. The assertive approach of William Tierney Clark, who is in charge of the construction of the bridge, about the perfection of the bridge is one of the stories that make the Chain Bridge meaningful. 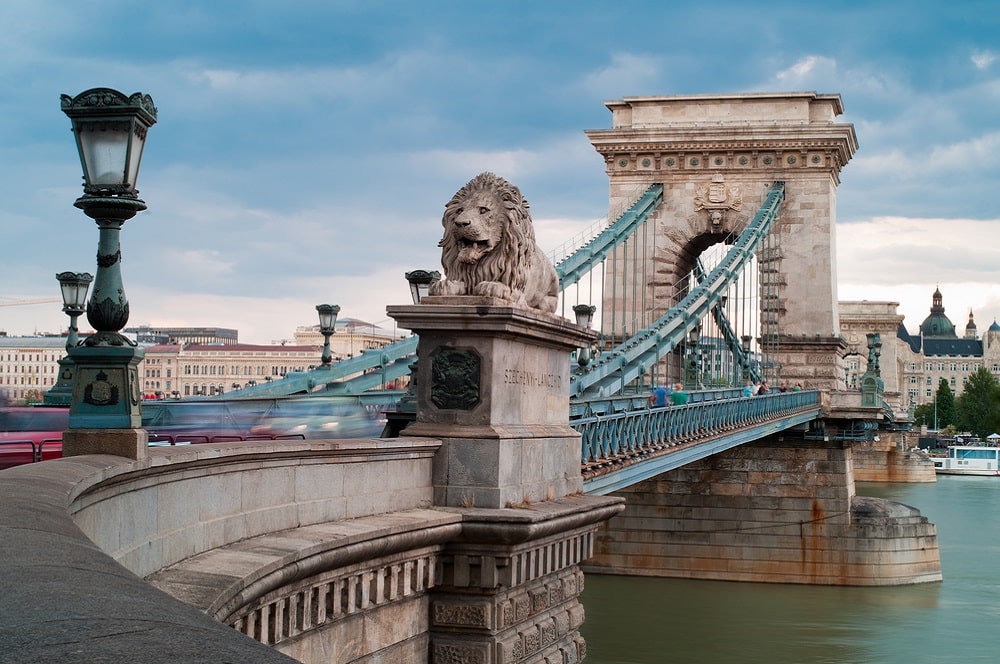 Chain Bridge is one of the most beautiful bridges in Europe. The bridges that connect both sides and connect the past with the present in Budapest are among the touristic places worth seeing. The Chain Bridge, Liberty Bridge, Elisabeth Bridge, and Margaret Bridge are the most famous bridges to see on the Budapest Tour. 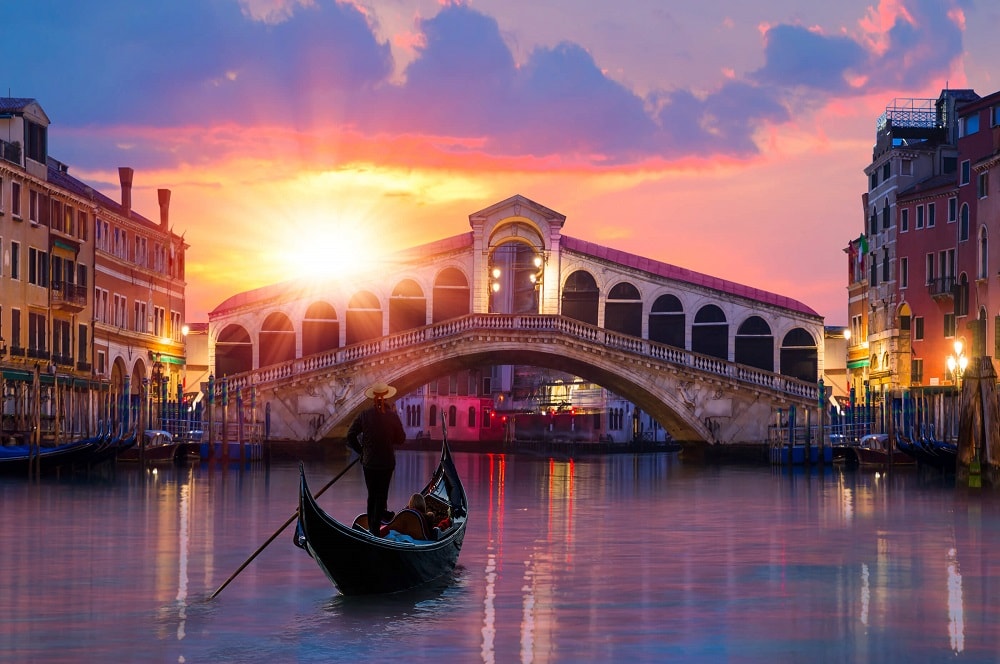 One of the most famous bridges in the city of Venice, famous for its canals and bridges, is the Rialto Bridge. The bridge, one of the symbolic structures of the city, was built in the 16th century. The most famous bridge on the Grand Canal is the Rialto Bridge. The Rialto Bridge, which connects San Marco and San Polo, was used commercially when it was first built, but today it is used for touristic purposes. There are souvenir shops on the bridge where glass, silk, jewelry, and many other souvenirs are sold. The bridge built by architect Antonio de Ponte is among the most beautiful bridges of Europe we will see in Venice. 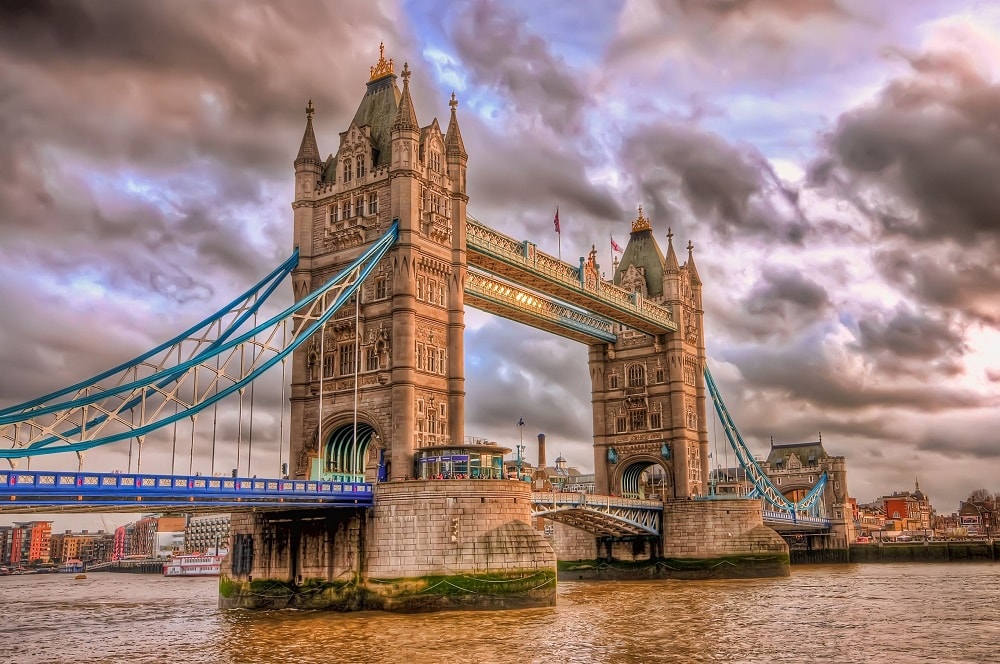 Tower Bridge is a combined scales and suspension bridge built in London between 1886 and 1894. The bridge crosses the River Thames near the Tower of London and has become a world-famous symbol of London. The Tower Bridge, named after the nearby Tower of London historic royal palace, has been one of London’s best-known symbols since its opening. 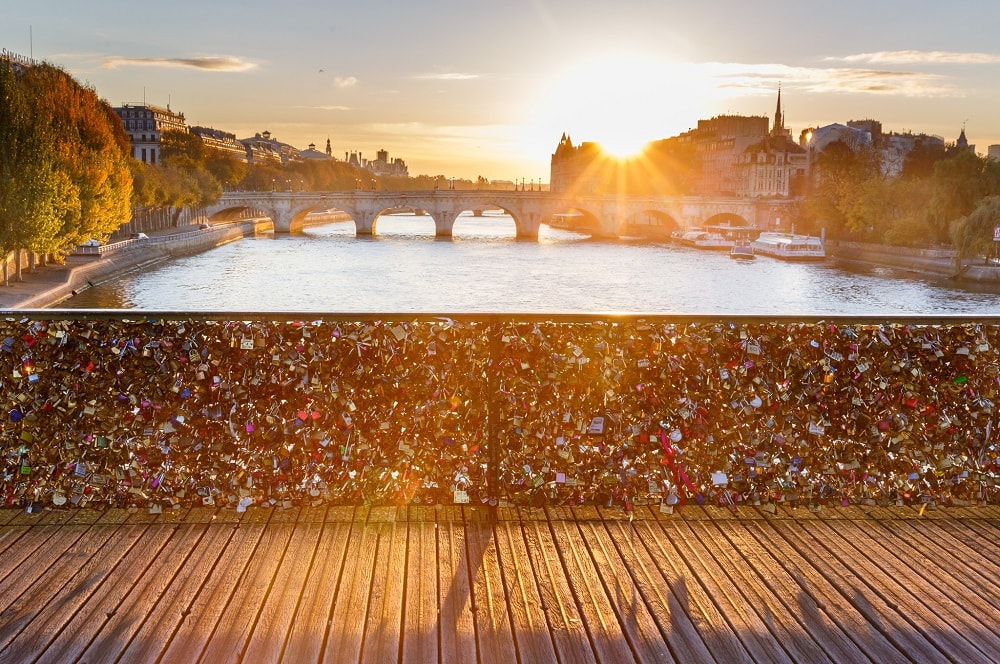 Another famous bridge in Europe is the Bridge of Lovers in Paris. The reason it is called the Bridge of Lovers is that people go to the bridge and write the name of their loved ones or their dates on the locks, hang the locks and throw their keys into the river. Thus, they believe that their love will last forever. There are so many locks on it that it’s a bridge with a risk of collapse. When you go to the bridge, it is very possible to witness the love of people and the times they live. 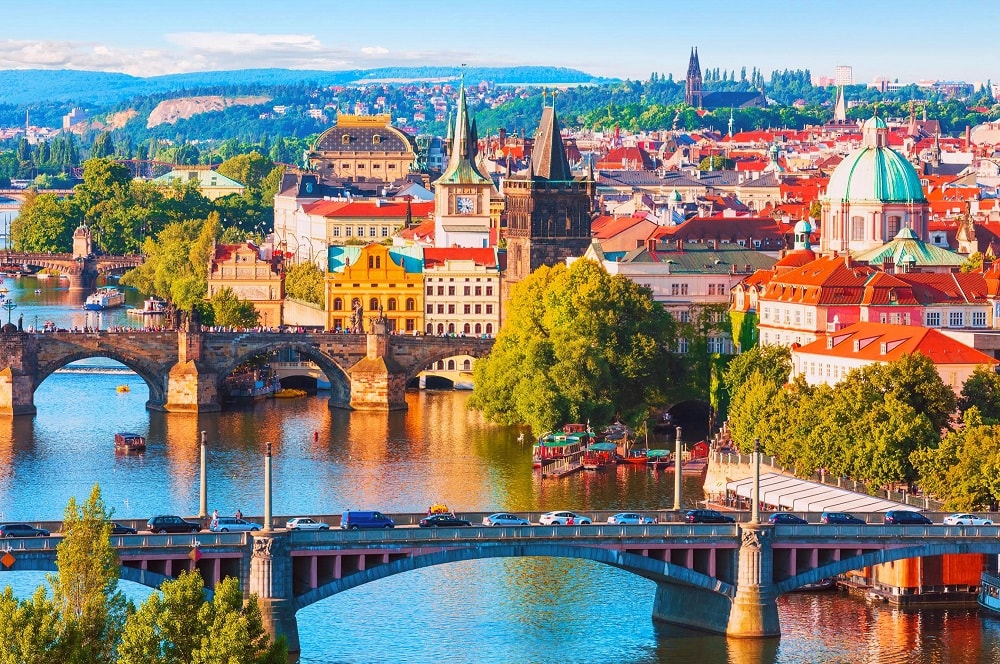 The Charles Bridge is a medieval stone arch bridge crossing the Vltava river in Prague, Czech Republic. The bridge, whose construction started in 1357, was built by King of Bohemia IV. It was finished in the period of Karl. The bridge, 516 meters long and 10 meters wide, has 16 arches and is only open to pedestrian access, and there are 30 statues decorated in baroque style. The statues represent important saints of Czech history. Charles Bridge is among the most sought-after touristic spots in Prague. 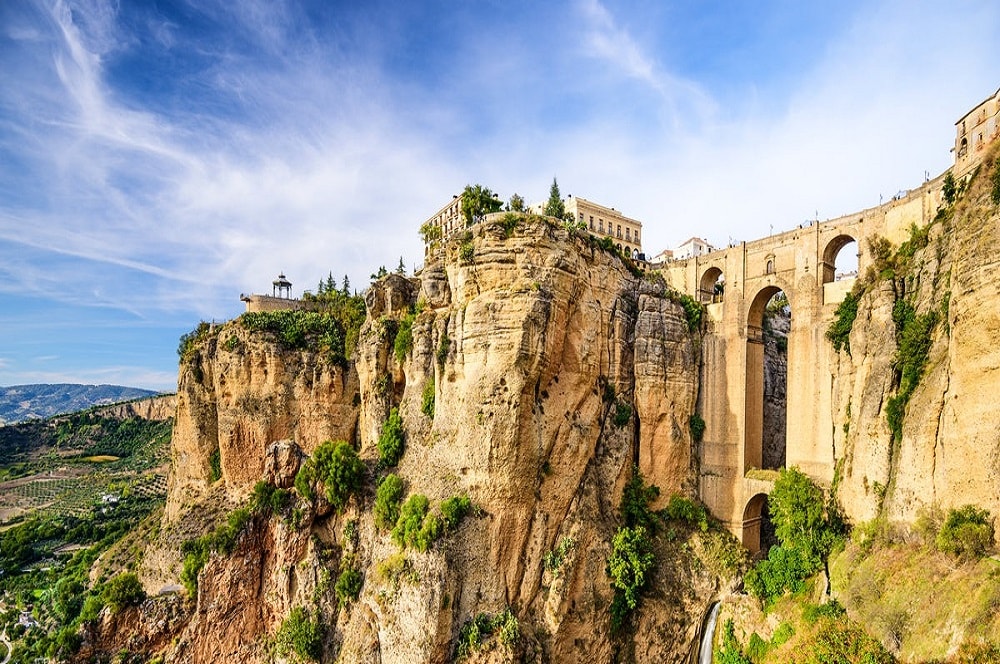 Puente Nuevo is the newest and largest of three bridges that span the 120-meter-deep abyss that carries the Guadalevín River and divides the city of Ronda in southern Spain in half. The bridge, whose construction began in 1751, could be completed in 42 years due to various obstacles. Its architect was José Martin de Aldehuela, who died in Malaga in 1802. The chief builder was Juan Antonio, Díaz Machuca. It is rumored that during the Spanish Civil War between 1936-1939, the cell in the middle was used as a torture room and some prisoners were thrown to the rocks from its window and killed.

*** You may be interested in;  Spain’s Historic City Seville Travel Guide 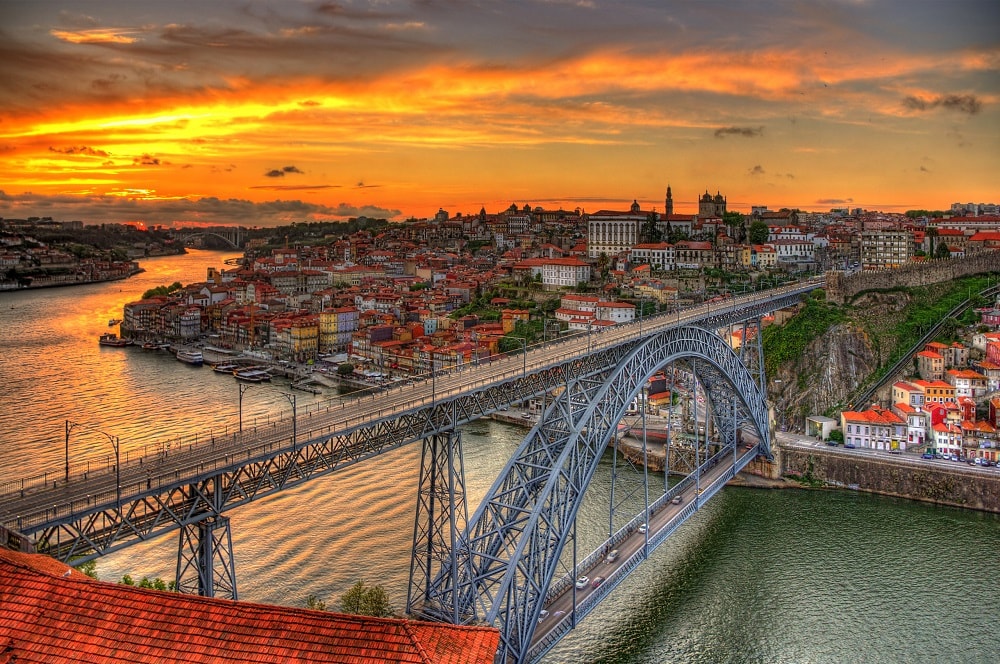 The Dom Luis I Bridge or Luis I Bridge is a double-deck metal arch bridge that runs along the Douro River between the Portuguese cities of Porto and Vila Nova de Gaia. The bridge, the symbol of Porto, was opened in 1886. The bridge, which is 395 meters long and 8 meters wide, is built entirely of iron, and has two platforms; While the Porto metro line passes from the upper platform, the lower platform is used as an automobile road.

*** You may be interested in; The 10 Best Tourist Places You Must See in Porto 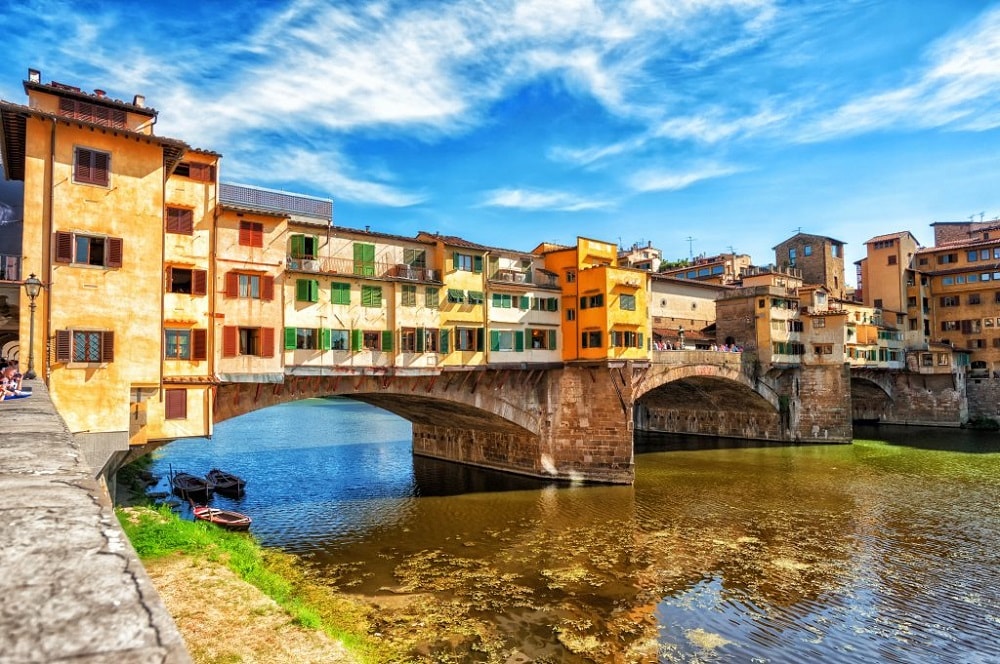 The Ponte Vecchio is a medieval stone, closed-beam, segmental-arched bridge over the Arno River in Florence, Italy. Ponte Vecchio, whose name means ‘Old Bridge’, is an example of a magnificent arched bridge built in the Middle Ages. The bridge built on the Arno river hosts the “bridge shops” that were common in Italy at the time. Jewelry shops, art galleries, and gift shops operate in the shops where butchers were located in the Middle Ages. 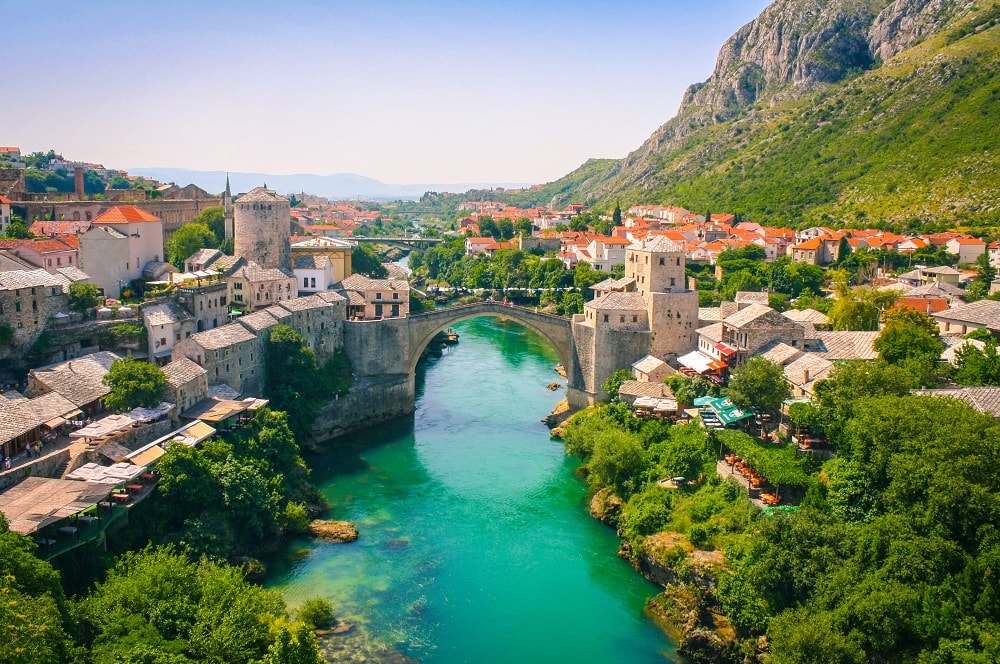 Mostar Bridge is one of the most elegant bridges in the world with its monolithic crescent-like appearance on the Neretva River in Mostar, the beautiful city of Bosnia and Herzegovina. The city of Mostar is like a historical engraving created by a famous painter with his works scattered in natural beauty, located on the road that follows the Neretva River and connects the Adriatic Sea and the Balkans.

Mostar Bridge is a rare work among the Ottoman period architectural works, with its functionality, aesthetics, and harmony with the texture of the city. The bridge, along with the old city of Mostar, has been on the UNESCO World Heritage List since 2005.