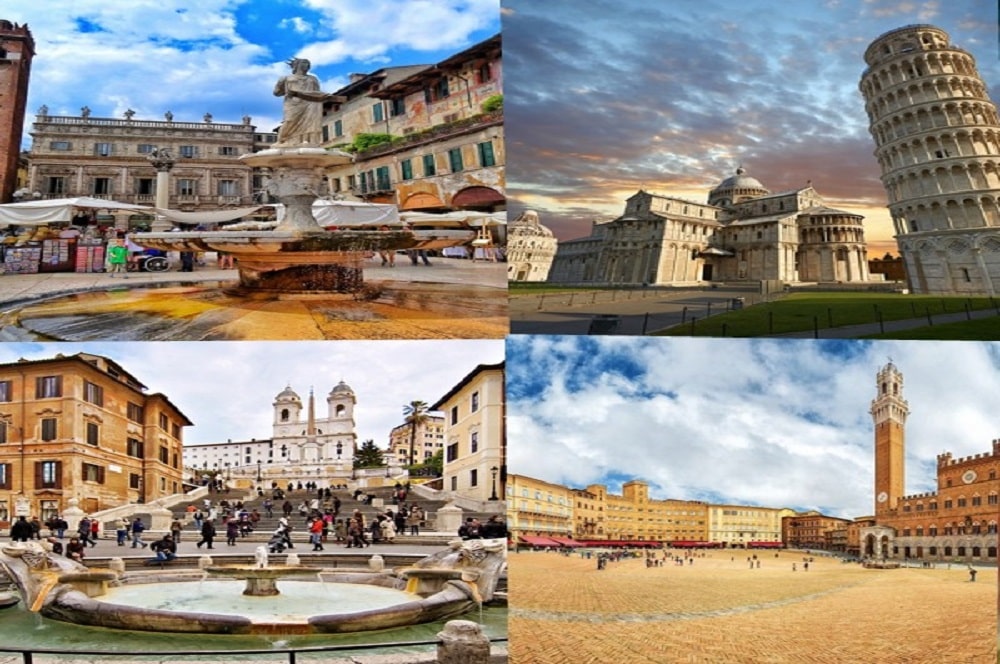 Counting down for the New Year, having a coffee and gossiping with friends, visiting the Christmas markets, or listening to the Pope… Beautiful city squares, or piazzas, that are part of daily life await you in every city of Italy.

An unforgettable experience awaits you in Italy, whether on New Year’s Eve or on hot summer days, to see Italy’s squares, each of which open to different cultural treasures. Let’s take a look at the 10 most famous squares in Italy that bring together many world-famous historical buildings, palaces, fountains, and millions of people … 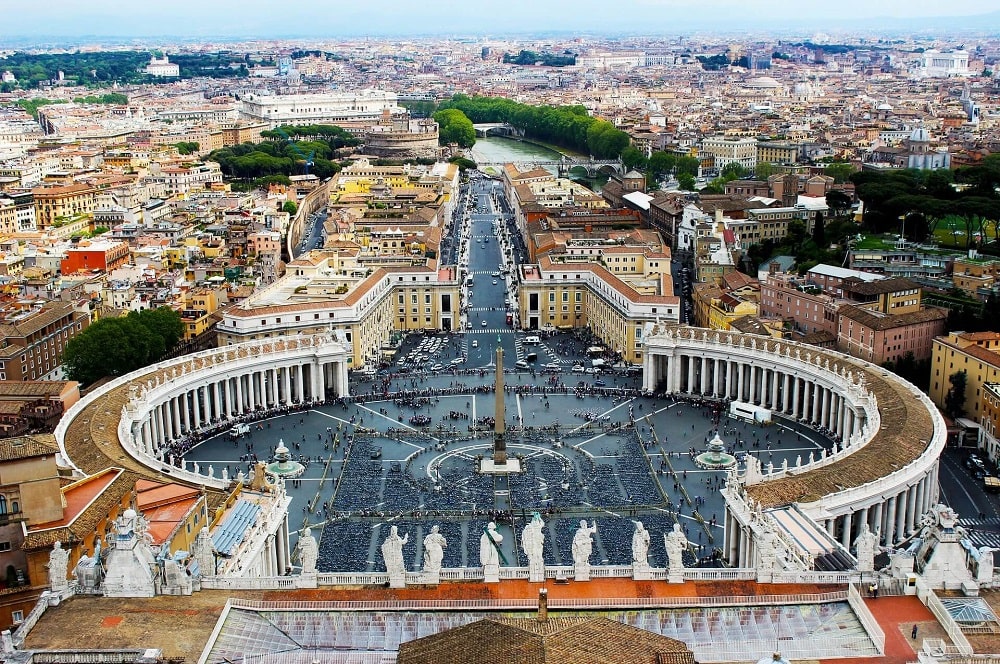 In the Vatican, the residence of the Pope, St. The elliptical square in front of the Pietro Basilica is the place where the Pope addresses the Catholic world or greets the public on New Year’s Eve. One of the must-see places in Rome, St. Pietro Square, designed by the famous sculptor Gian Lorenzo Bernini between 1656 and 1667, is 320 meters long and 240 meters wide and brings together more than 300 thousand people on special occasions. 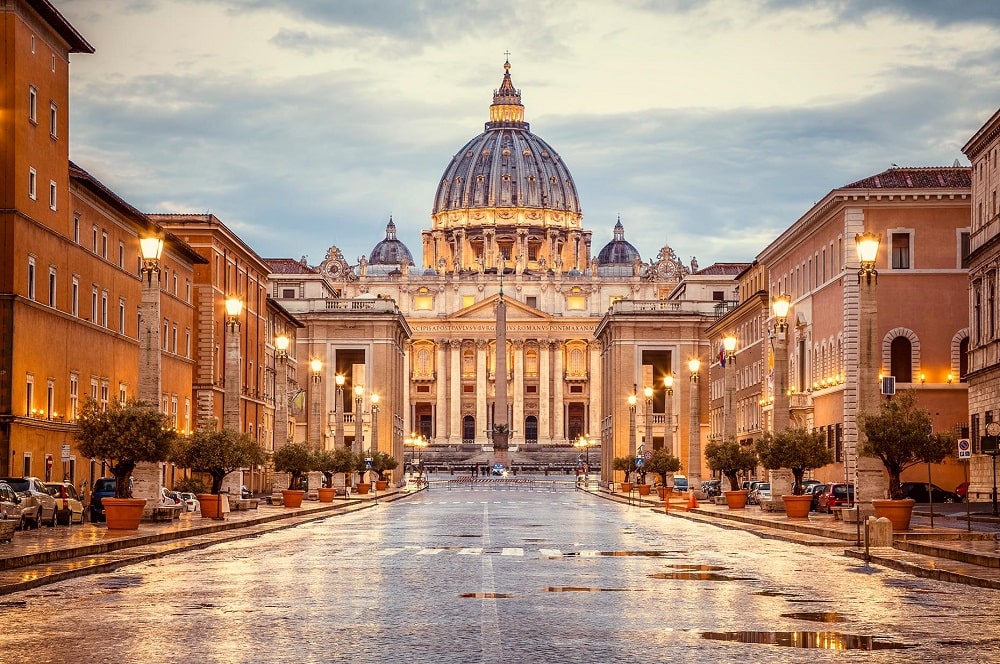 One of the most important things to see in St. Peter’s Square is the 284 columns lined up in four rows that surround the square in perfect order. Above these columns are statues of 140 saints that Bernini completed with his students. In the middle of the square, the 25-meter-high obelisk, which was erected by Pope Sixtus V, brought from Egypt is also worth seeing. One of the striking points is that there is a double-cross sign on the obelisk made in Egypt in the Ancient Age. 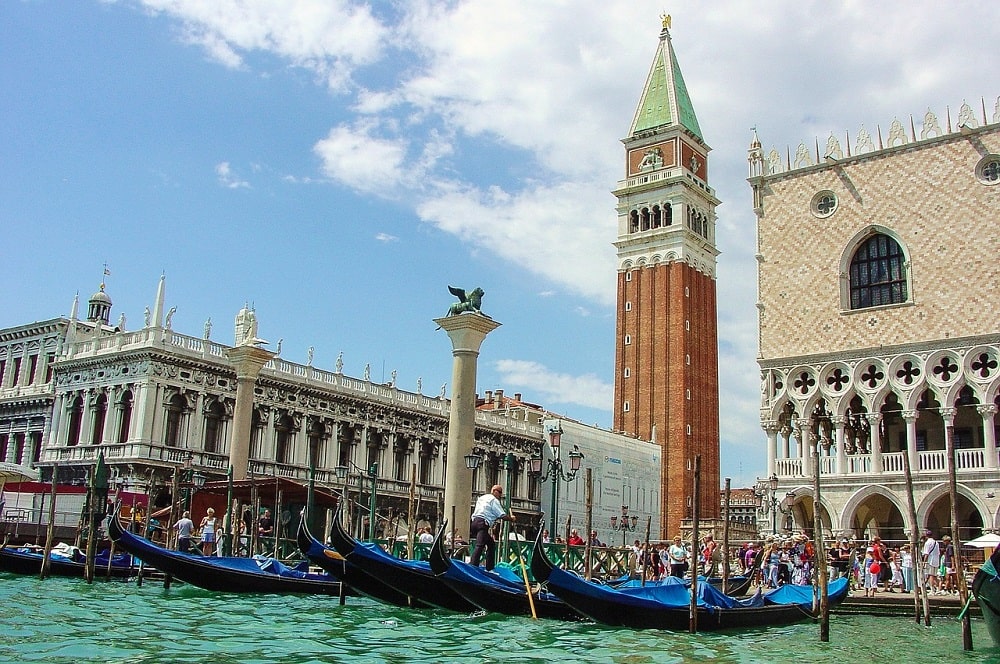 This central point, which welcomes those who reach the city by sea during the period when Venice was a city-state, is known as San Marco Square today. The enchanting Basilica of St Mark, the Palace of the Dukes, the red-tiled Campanile Tower, and the Torre dell Orologio Tower are located in this square.

The perfect place to start your Venice tour, San Marco Square is surrounded by magnificent works of art. Visiting San Marco Square should start from the St. Mark’s Basilica, which has invaluable artifacts.

The basilica, which attracts attention with its magnificent dome and the Horses of San Marco located above the entrance door, was built for the burial of St. Mark’s (San Marco), brought from Alexandria in the 9th century. 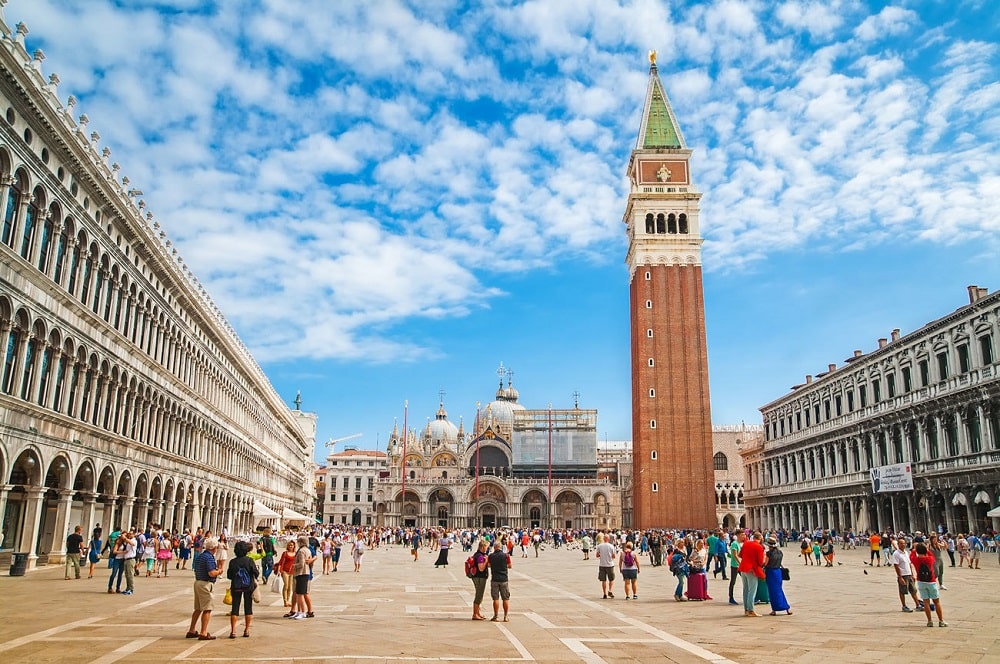 The basilica, which was destroyed by a fire, was rebuilt in the 11th century and turned into a structure that is open to visitors today. The Basilica is famous for its stunning mosaics and bronze statues of the San Marco Horses.

The Campanile Bell Tower, which is one of the symbols of Venice, enabled the events in the city to be announced to the public with 5 different bells. Originally designed as a lighthouse, this high tower is a point where you can take a photo of the whole city by taking a lift. The five-story Torre dell Orologio Tower and Dukes Palace, famous for their astrological clock, are must-see places in Venice. 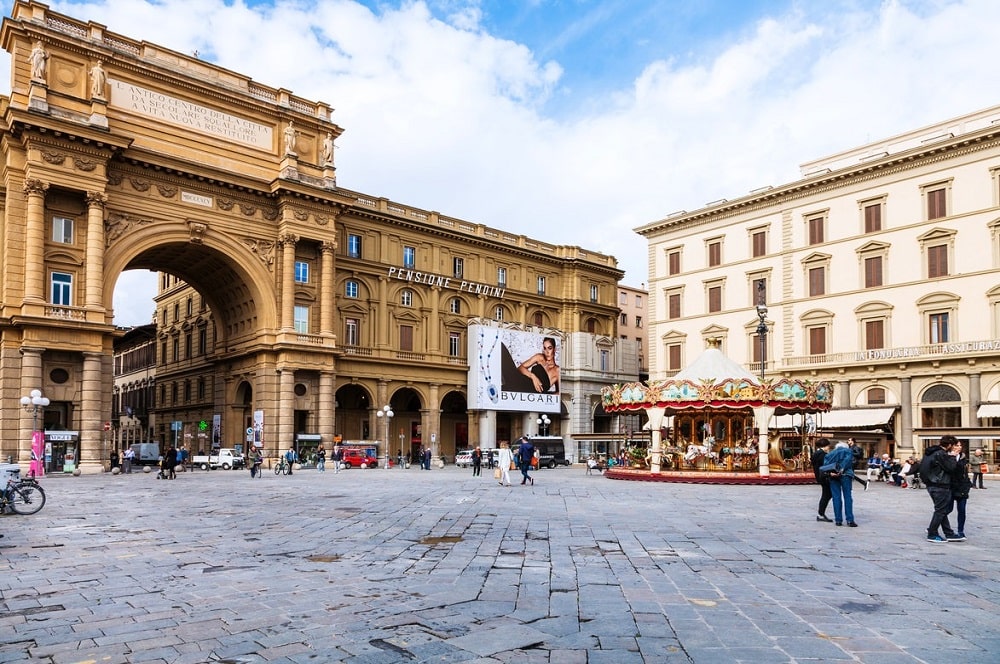 Considering that in medieval cities, squares were the center of a city’s political, religious, and economic activities; We can say that Piazza Della Signoria in Florence has a value far above these. Signoria Square was the political center not only of Florence but of the entire Italian Renaissance.

Palazzo Vecchio, the palace of the Medici dynasty, which supported Renaissance artists such as Michelangelo, Vasari, Leonardo, Brunelleschi, and Donatello, is located in this square. Also here is Loggia Dei Lanzi, one of the world’s most magnificent public sculpture galleries. This square, which hosts many works such as the Fountain of Neptune, Bandinelli’s Hercules, is almost an open-air museum. 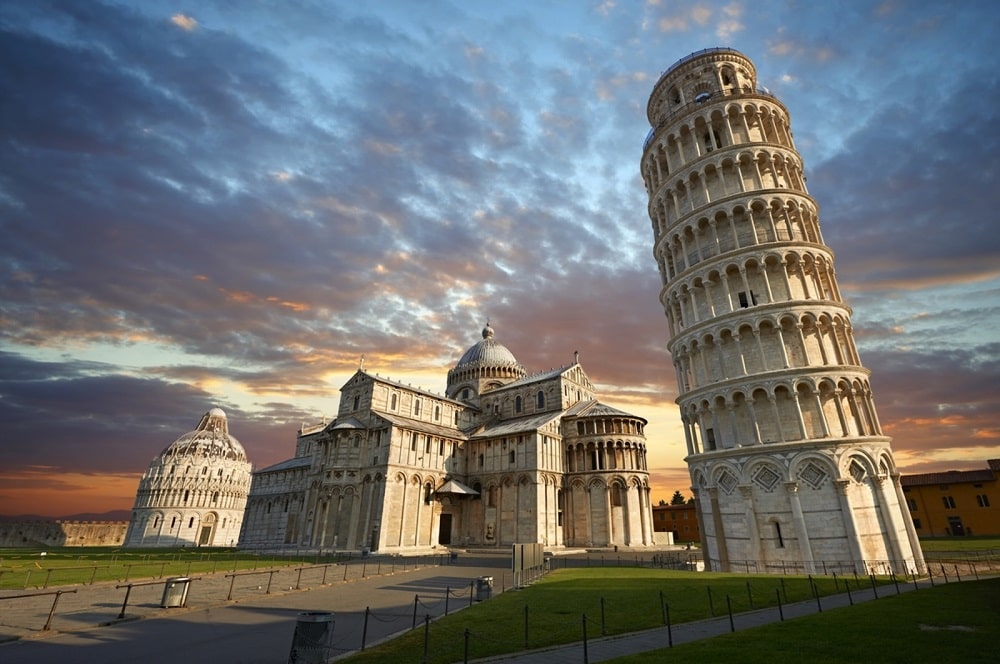 The most different and unusual square you can visit in Italy can be called The Piazza Dei Miracoli, the Square of Miracles in Pisa. The square, whose ground is mostly covered with green grass, has one of the most famous towers in the world. The Pisa Tower, which took 177 years to plan and 5 years to build, is known for its inclination due to the slippage in the soil. Pisa Square has been on the UNESCO World Heritage List since 1987, with its bright white baptistery structure, mausoleum, and Leaning Tower of Pisa.

In Rome, which has hundreds of squares, the most famous and popular square of the city can be called Navona Piazza. The oval square, which was built as a stadium in ancient Roman times, has been the scene of sports for many years. The buildings around the oval square are built on the walls surrounding the stadium.

Many works of art were added to this square, which is close to the Vatican, in line with the wishes of the popes. For example, Bernini’s Fountain of Four Rivers (Fontana Dei Quattro Fiumi) is located here. The 4 sculptures all over the fountain, built in the 17th century, symbolized the four great rivers of the world known at that time. 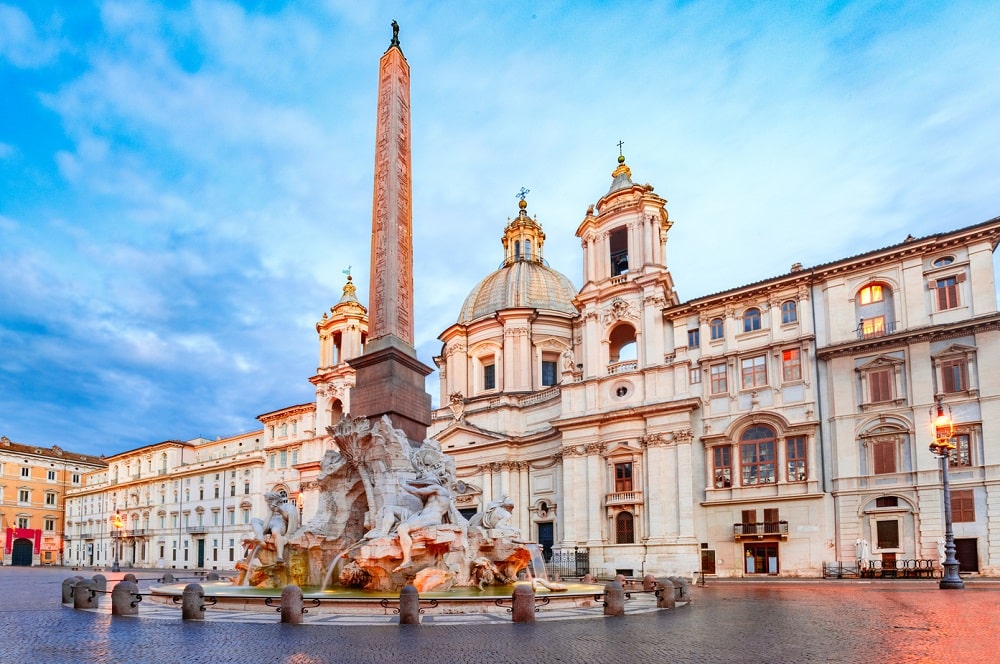 St. The Church of Agnese in Agone and Pamphilij Palace, where the family of Giovanni Batista Pamphilij, named Pope Innocent 10, lived, are also important historical buildings in this square. Today, this square, which is surrounded by cafes and restaurants, is also a place frequented by street artists. Here you can see countless artists such as those who buy their canvases and paint, magicians, living sculptures.

*** You may be interested in; 5 Places You Should Have a Photo in Rome 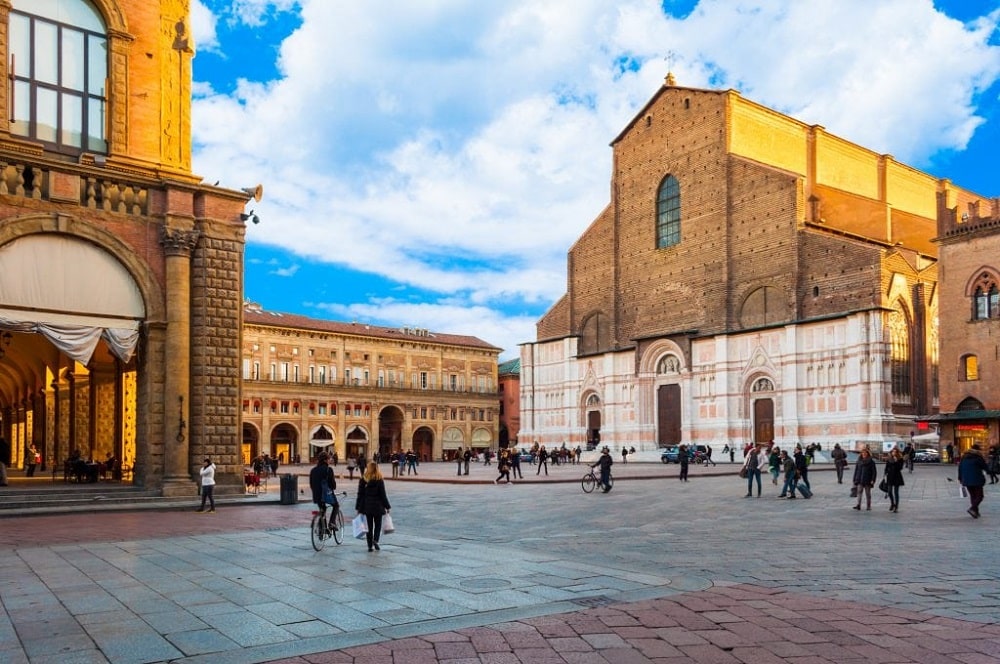 Another of Italy’s most beautiful squares is Maggiore Square in Bologna. Located in the heart of the city, Piazza Maggiore (Grand Square) is the perfect starting point for a Bologna tour. Also, Maggiore Square, which has witnessed the history of the city since the 13th century; is the place where many historical buildings such as Bologna Cathedral, San Petronio Basilica, Sala Stock Exchange Library.

However, the most special work in the square that you should pay your full attention to is the Neptune Fountain. In the northwest corner of the square, where Piazza del Nettuno begins, you can see the 16th century Fountain of Neptune. 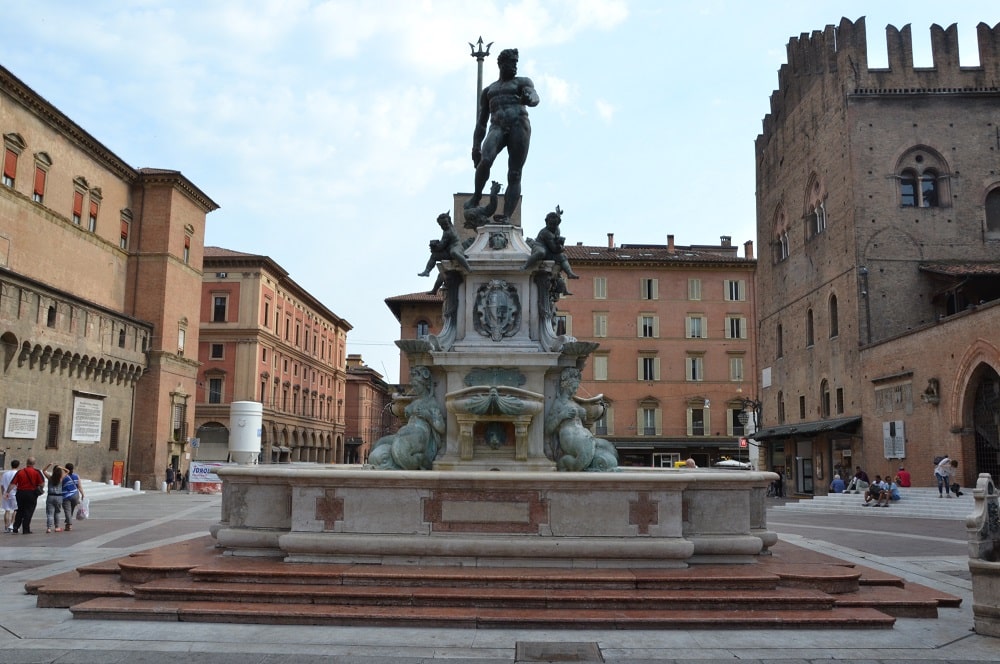 Under the feet of Neptune, the god of the sea, there are 4 fountains in the silhouette of half-fish, half-human, representing the world’s four great rivers (Ganges, Nile, Danube, and Amazon). If you look carefully at this fountain, you will see that the logo of the Italian sports car company Maserati is inspired by it. 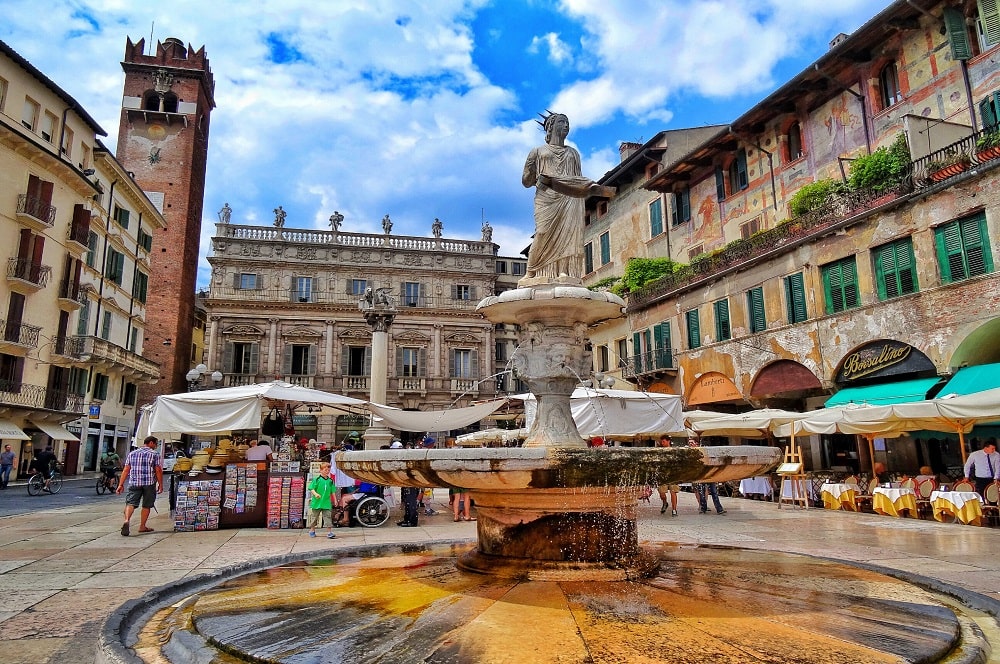 Erbe Square is one of the oldest places in Verona, the city of Romeo and Juliet. Considered one of the liveliest places in the city, the square is the heartbeat of the city since the Roman Empire.

Featuring Casa Dei Mercanti (House of Merchants), Old Town Hall and Lamberti Tower, Palazzo Maffei and Mazzanti Houses, Piazza Delle Erbe resembles an open-air museum with countless historical monuments. You can sit in the cafes or restaurants around the square and breathe the city’s authentic atmosphere. 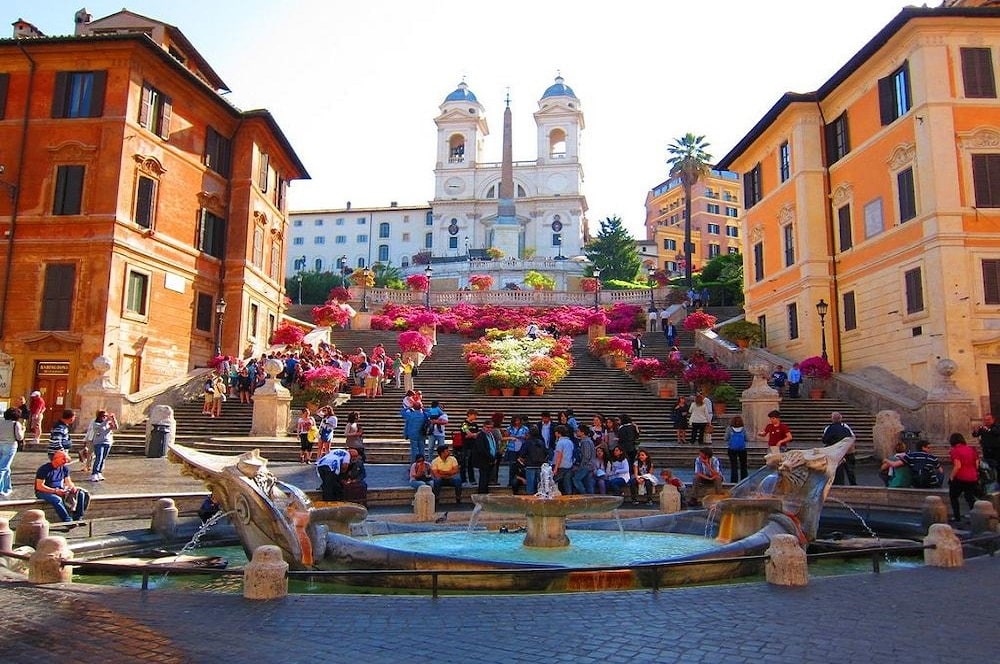 This square, where Italians and tourists mingle in Rome, is the first point to be visited by those who want to feel Roman. Located in one of Rome’s most luxurious districts, Piazza di Spagna opens up to the city’s important shopping streets. 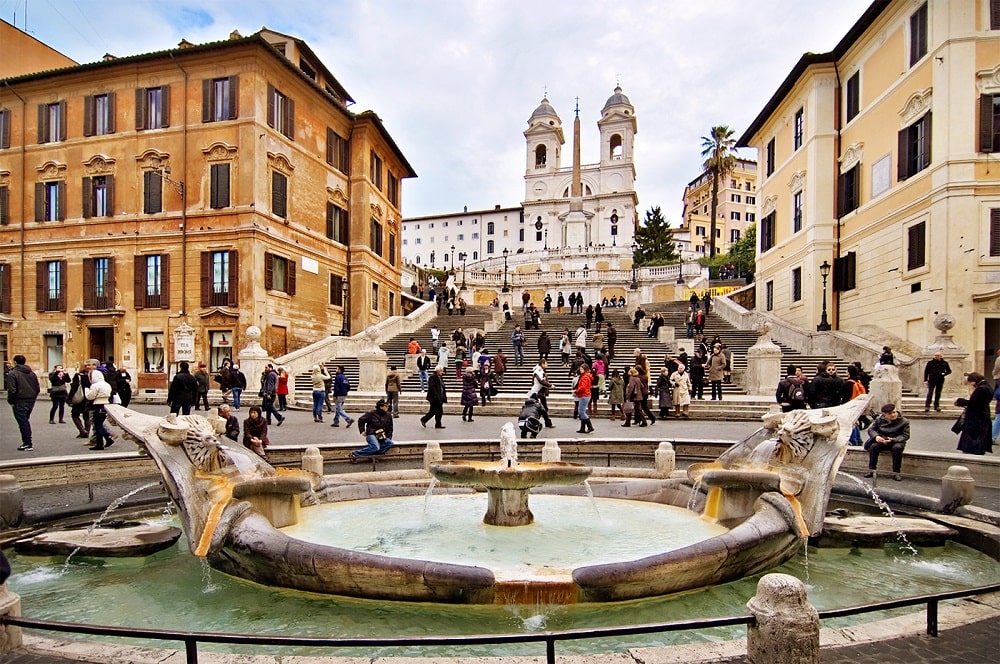 The most famous work in Spain Square is the Fontana della Barcaccia Fountain, the Old Boat Fountain, built-in 1627. Built by Pietro Bernini and his son Gian Lorenzo Bernini, the fountain is considered to be one of Rome’s most well-known fountains after Trevi Fountain.

The Trinita Dei Monti Church, rising at the top of the Spanish Steps, draws attention with its two towers overlooking the square. We recommend you to see it with the frescoes in the church built-in 1585. 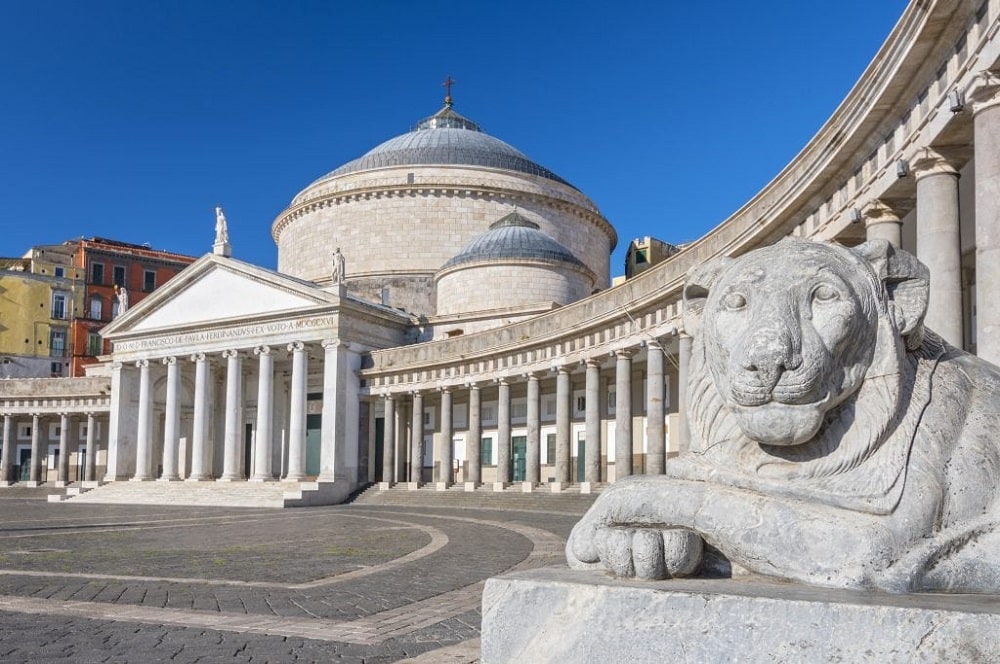 This beautiful square, a few steps from the Bay of Naples, can be considered new. The square, dating from the first years of the 19th century, is one of the most vibrant and vibrant places in the city. Plebiscito Square, with its beautiful government buildings and royal structures, is the backdrop for magnificent photographs.

Basilica di San Francesco da Paola, one of the most touristic buildings in Naples, is also located here. The people of Naples enjoy the concerts, shows, and open-air art exhibitions that take place at Piazza del Plebiscito throughout the year. This square also hosts the world’s largest fireworks display on New Year’s Eve. 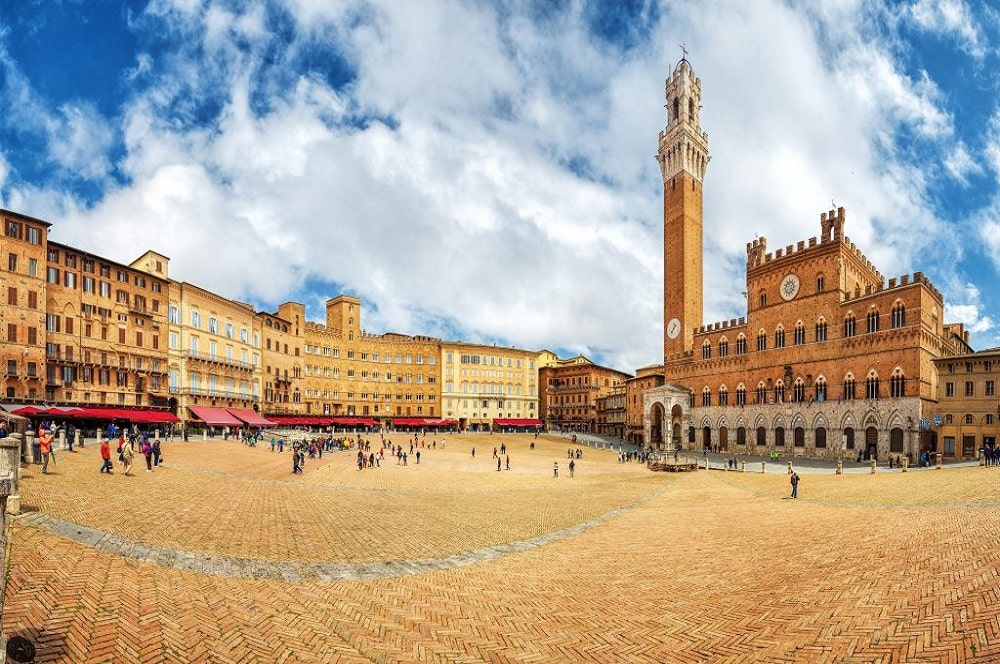 Standing out with its shell-shaped architecture unlike the traditional medieval squares of Italy, Campo Square is located in the heart of Siena. This magnificent and well-preserved square is surrounded by palaces, the Palazzo Pubblico, the town hall, and the Torre del Mangia Tower.

The main source of the fame of Campo Square is the Polio Horse Races that take place here. Representing the different neighborhoods of Siena, the ten best horses and jockeys have a magnificent race every two years. It would be beneficial to buy your ticket months in advance to be able to watch this tradition, which has been ongoing since the Middle Ages, live from a good location.