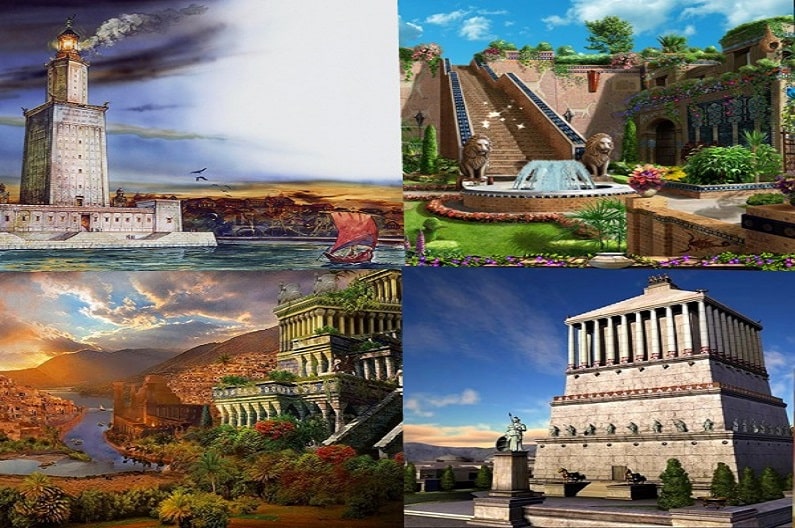 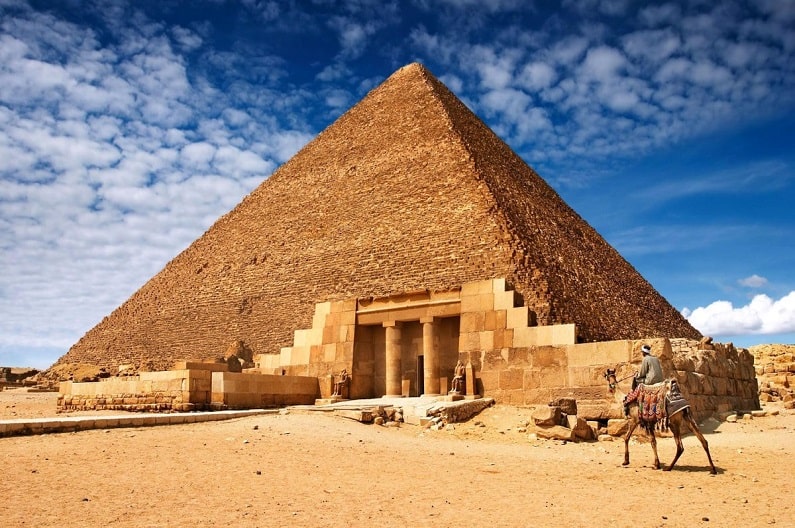 The Pyramid of Cheops, the largest pyramid in Egypt, is also called the Great Pyramid. This pyramid, which is the only structure from the old list that has survived to the present day, was built using limestone. 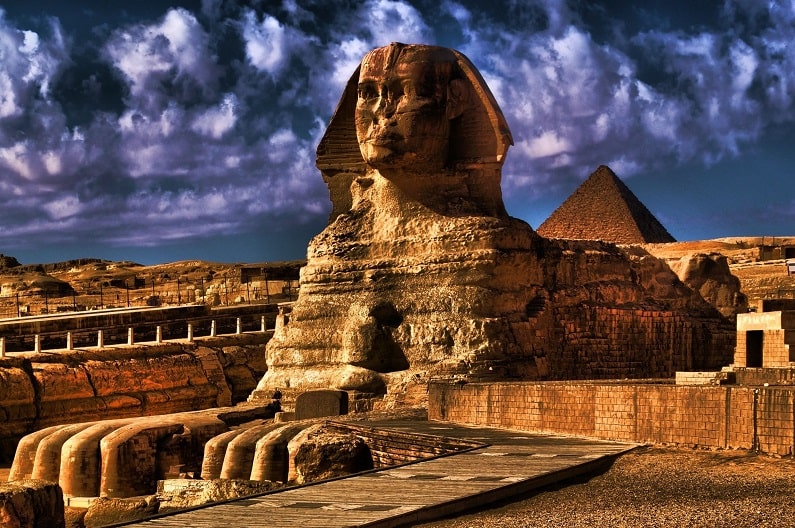 The pyramid, which has been the largest man-made structure in the world for 3800 years, is located in the city of Giza, near the capital of Egypt, Cairo. In the pyramid area, which is called the Giza Necropolis or cemetery, there are also the smaller Kefren and Mikerinos Pyramids in addition to Cheops.

*** You may be interested in; The 7 Mysterious Facts About the Giza Pyramids in Egypt 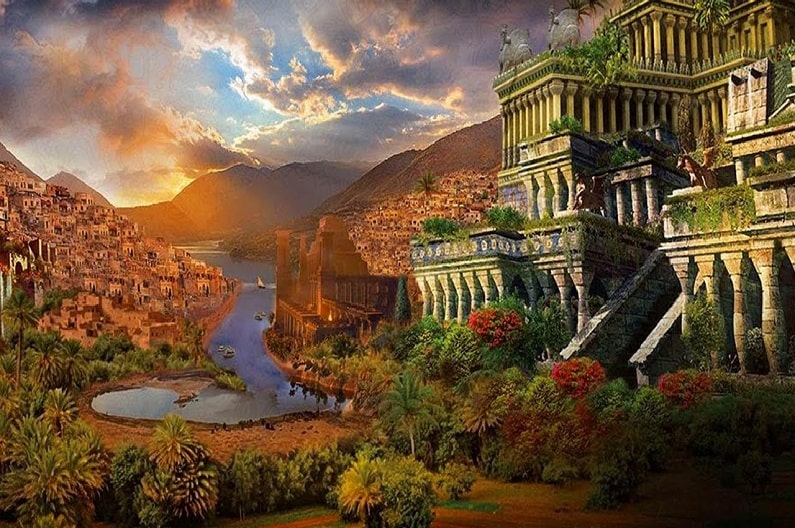 The Hanging Gardens of Babylon, whose exact location cannot be determined, is a complex that was chosen as one of the seven wonders of the Old World but has not survived. It is thought to have been built in the ancient city of Babylon, near present-day Babylon, Iraq.

Babylon was founded around the city of Babylon in Mesopotamia in 1894 BC. The center of Babylon is located in the town of El Hilla in present-day Iraq. There is no definitive proof of these gardens in Babylonian texts, and no archaeological evidence of the garden’s physical existence has yet been found. 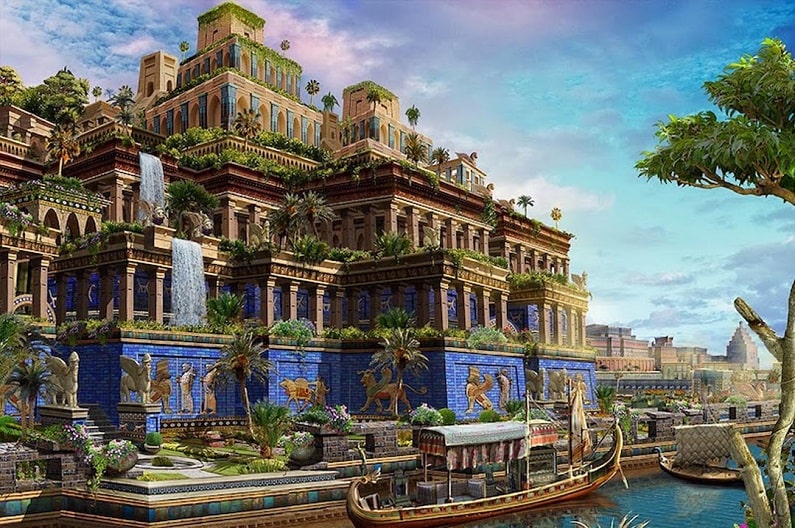 According to legend, the garden was built by the Babylonian King-Emperor II. It was specially designed by Nebuchadnezzar for his wife, Queen Amitis. Since the queen was upset that she could not see the green hills of her hometown in Babylon, the emperor, who wanted to relieve her queen’s sadness and longing, established a city rising on lush gardens in the continental climate of Iraq. It caused the Hanging Gardens of Babylon, which are called the gardens of the east, and the city of Babylon to be seen as the utopian city of the ancient world and create paradise-like depictions.

The aforementioned construction of the Hanging Gardens of Babylon is a unique example of architecture and engineering. The water rises upwards through the pressure exerted by screws and spiral machines and through aqueducts. Hanging gardens are connected to each other with wooden beams, but these beams do not rot with rain, but also swell, allowing the plants in the roots to grow faster and stronger.

*** You may be interested in; The 10 Most Sexually Satisfied Countries in the World 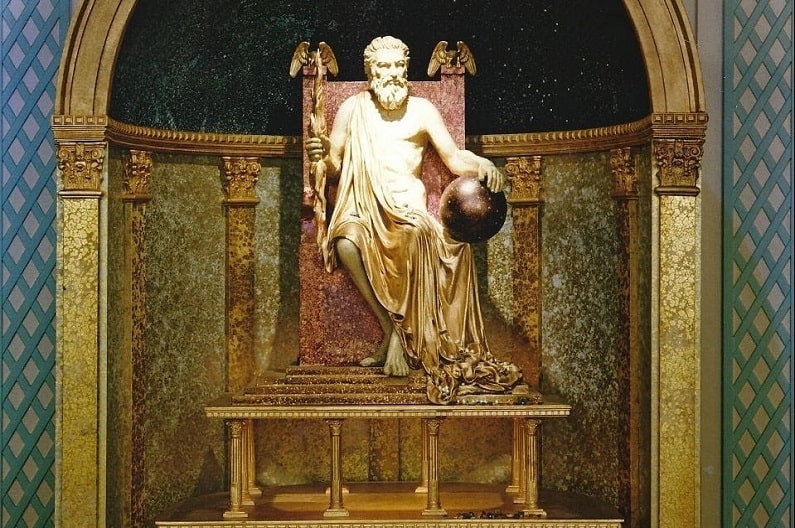 The Statue of Zeus, built in the Greek city of Olympos or Olympia in 450 BC, is dedicated to Zeus, the chief god of Ancient Greek mythology. It was built by the famous sculptor Phidias, who also made the statue of Athena in the Parthenon Temple in Athens.

The statue itself is made of a wooden skeleton, with ivory and gold pieces and precious stones placed on it. The 12-meter-tall statue has Nike, the Goddess of Victory, in its right hand, and an eagle, a symbol of power and sovereignty, in its left hand. 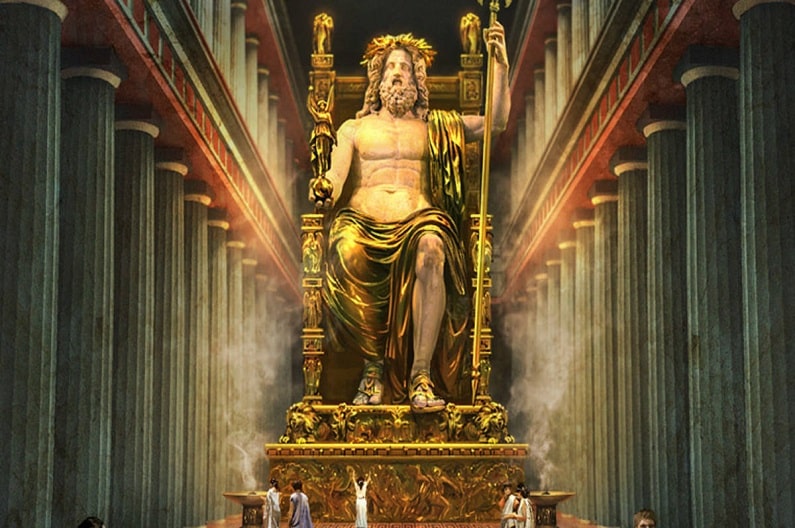 The Statue and Temple of Zeus, which is described as quite impressive, was closed in 391 AD; Then it was moved to Istanbul, which was then Constantinople, where it was completely destroyed in a fire in 462. Some parts of the statue are exhibited in the Louvre Museum in Paris. 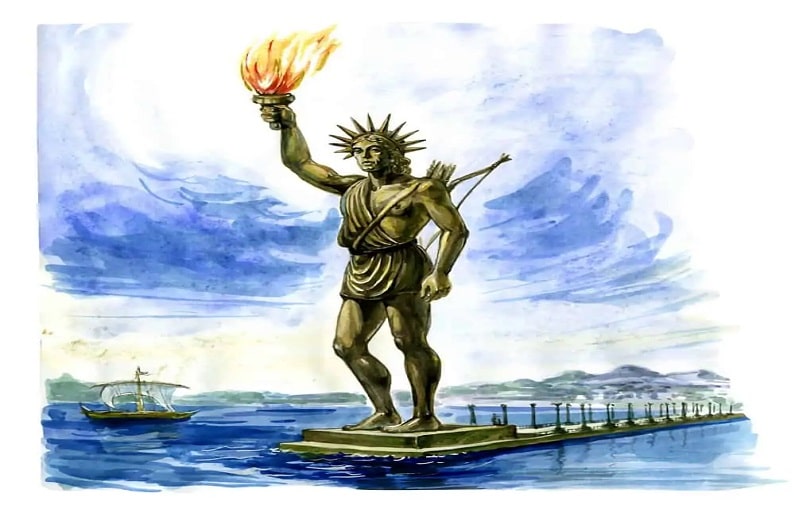 The statue, located at the port entrance of the city of Rhodes on the island of Rhodes in ancient times, is the statue of the Greek Sun God Helios. After the Macedonian Antigonites attacked Rhodes in 305 BC and retreated after a siege that lasted for 1 year, the Rhodesians built a statue that will take 12 years to build and show their gratitude to the gods. 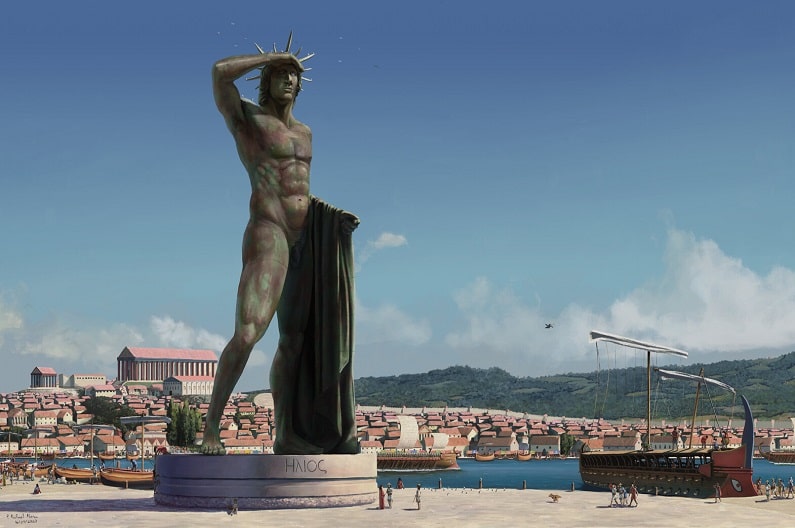 The statue was destroyed in an earthquake in 225 or 226 BC and remained sideways for several centuries. In the construction of the Statue of Liberty in New York, the French sculptor Frederic Auguste Bartholdi was inspired by the statue of Rhodes. 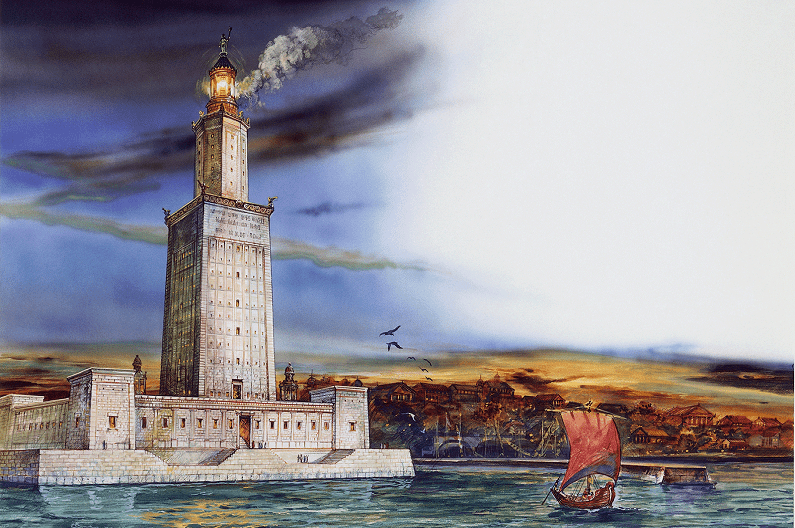 The Alexandria Lighthouse, the highest of the lighthouse’s built-in history, has not survived to the present day. It was built by Ptolemy, the first king of the Ptolemy Dynasty, which ruled Egypt, on Pharros Island, opposite the Alexandria Port. 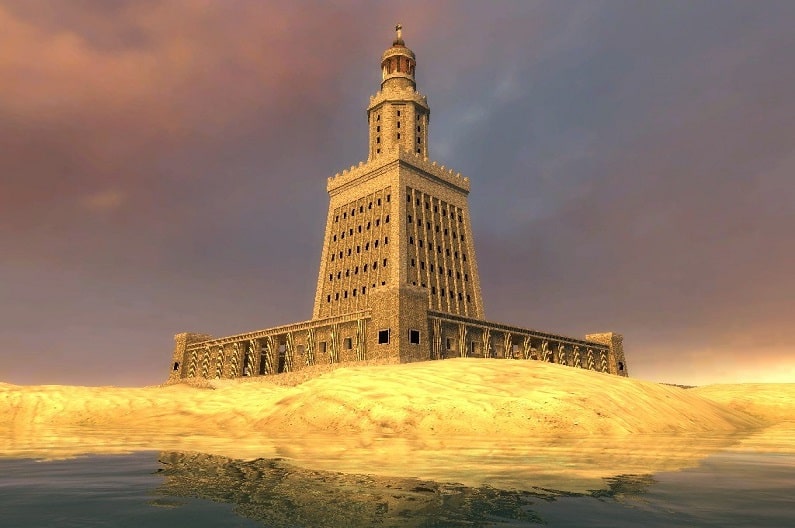 The 135-meter-long lantern is made of white marble, and the bronze mirror on its top can be seen from 70 kilometers away, guiding the ships in the Mediterranean. The lighthouse was destroyed by earthquakes and storms. The lighthouse was called “Pharos” because of the name of the island on which it was settled, and today this word and its derivatives mean “lighthouse” in many languages. 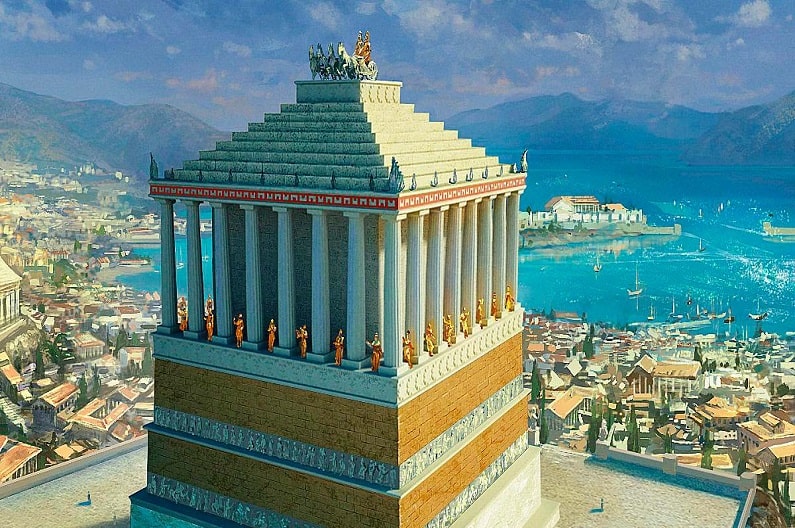 The mausoleum, which was built by his wife and sister after the death of the King in the name of King Mausolos, was located in Halicarnassus, which we know as Bodrum today. The Halicarnassus Mausoleum, which is the first example of a mausoleum in the world, draws attention with its rather large dimensions. 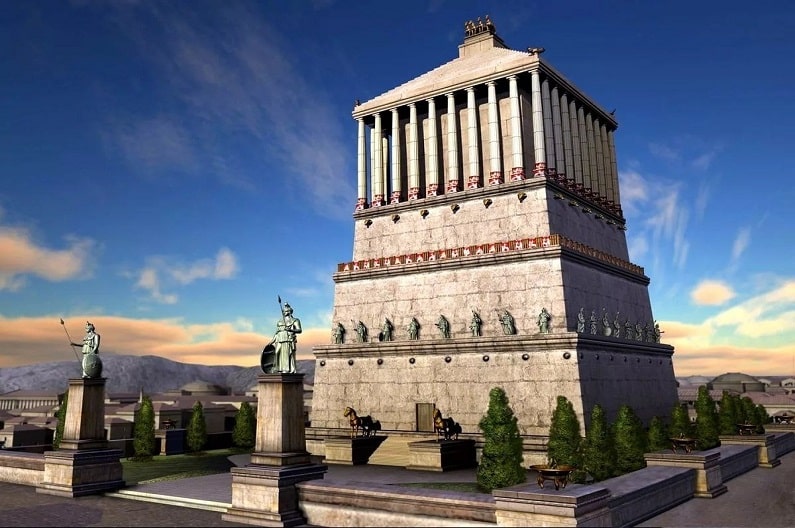 Since it has a pyramid-like roof, it shows similarities with Egyptian architecture and with its columns, Greek architecture. Today, the mausoleum area is visited as an open-air museum, as it is an example of the mausoleums that came after it.

The name of the king, Mausolos, was also the inspiration for the mausoleum building to gain its name. 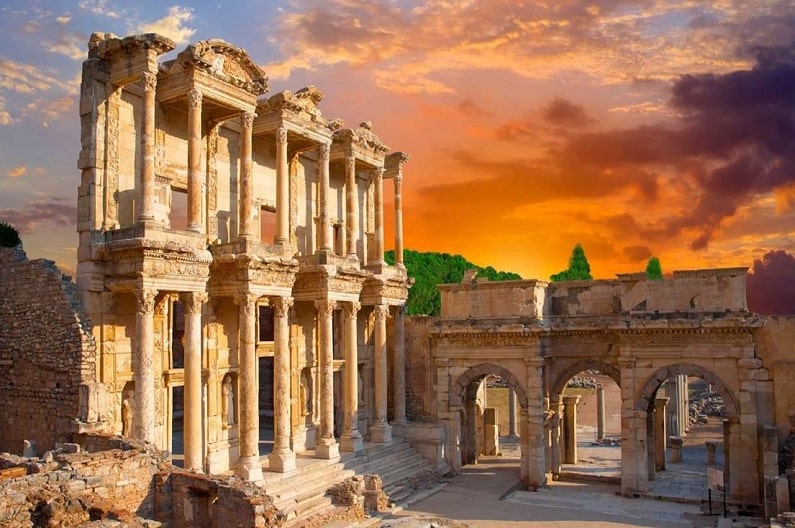 The Temple of Artemis, dedicated to the Goddess Artemis, is located in the Selçuk district of İzmir and is 4 kilometers from the Ephesus Ruins. Artemis is the god of the moon, hunting, and fertility in Greek Mythology and is the twin sister of Apollo.

The temple, which is estimated to have been built in 550 BC, was made entirely of marble, but only a few pieces of marble remain today. It is said that the construction of the temple took about 120 years. The person who started its construction is the Lydian King Kroisos.

Above proud Babylon, I saw the wall of chariots, and the statue of Zeus in Alpheus, and the hanging gardens, and the column of the Sun, and the colossal work of the high pyramids, and the vast tomb of Mausolos; but when I saw Artemis’ house built on the clouds, all the other wonders lost their shine and I said, “There! Outside of Olympus, the Sun has never looked at anything this big. (Antipater, Greek Anthology [(Greek Anthology, IX.58)]