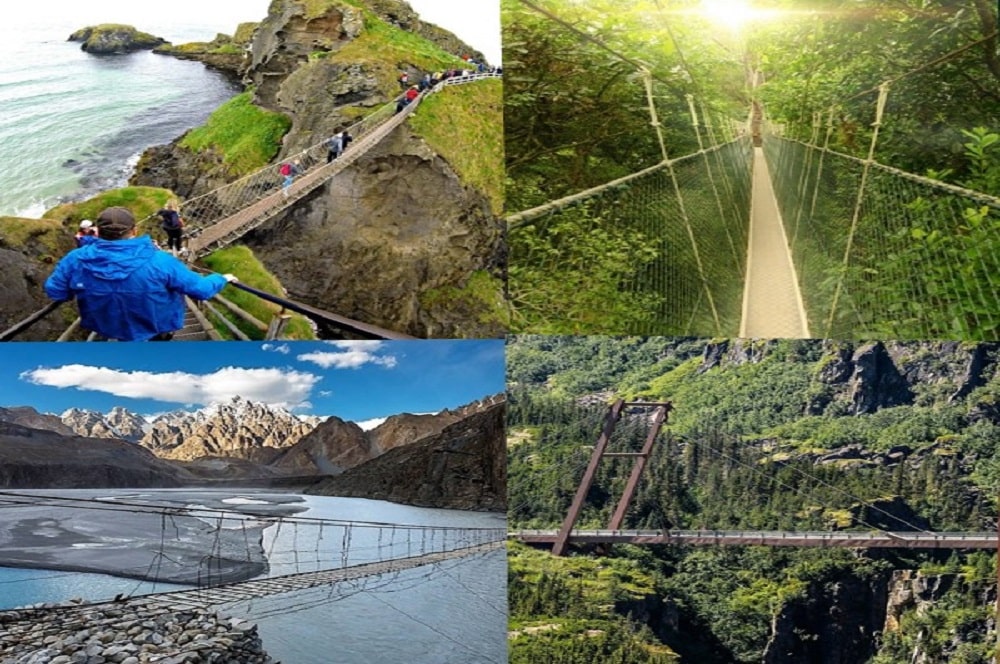 Let’s warn those who are afraid of heights! This list is definitely not for you! But if you want to feel the adrenaline in your veins, this article is for you! We have listed the 10 scariest bridges in the world that want courage to go through. Your hair will go bumps! 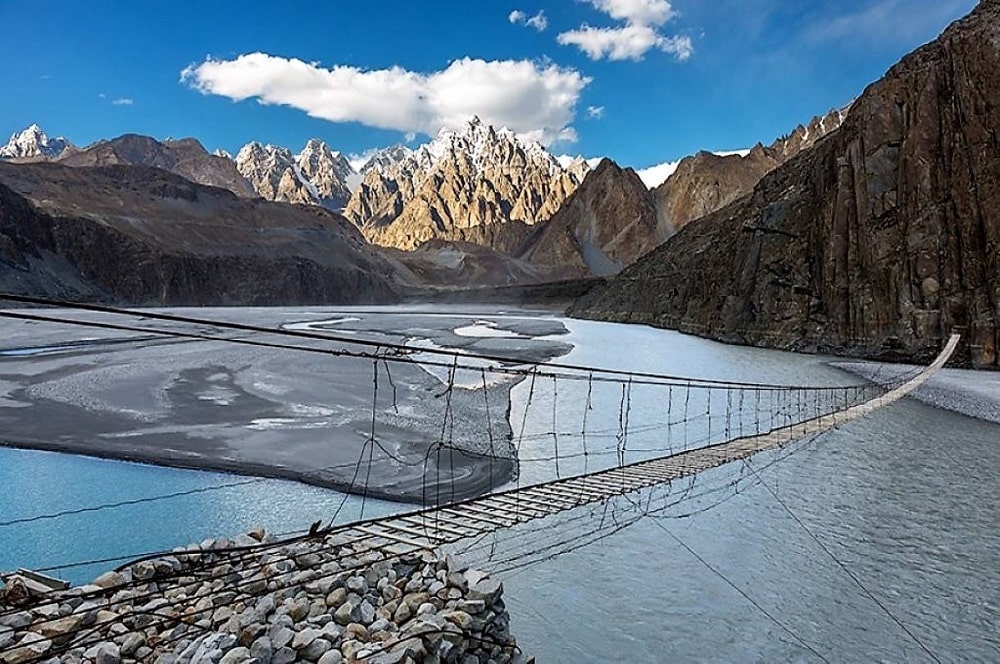 This bridge in Huseyni town, located at an altitude of 2600 meters in the Gilgit-Baltistan region, connects the two sides of the Hunza River. Although the bridge has lost its balance some time ago, it is still used because it is the only way to unite people living on both sides of the river.The bridge, which no one can predict for how long to survive, promises a breathtaking view of the Karakurum Mountains, a part of the Himalayas, for those who dare to take risks and pass over them.

Incas were a civilization in the Andes with a wide path and handmade bridge system. After the Spaniards came to South America, although many of these bridges made of straw and grass have disappeared, a few have managed to survive. Q’eswachaka Bridge, one of them, is located 100 km from Cuzco. The bridge continues to be built all over again every year with the grass-based technology of the lost Inca civilization 500 years ago by the locals living around. 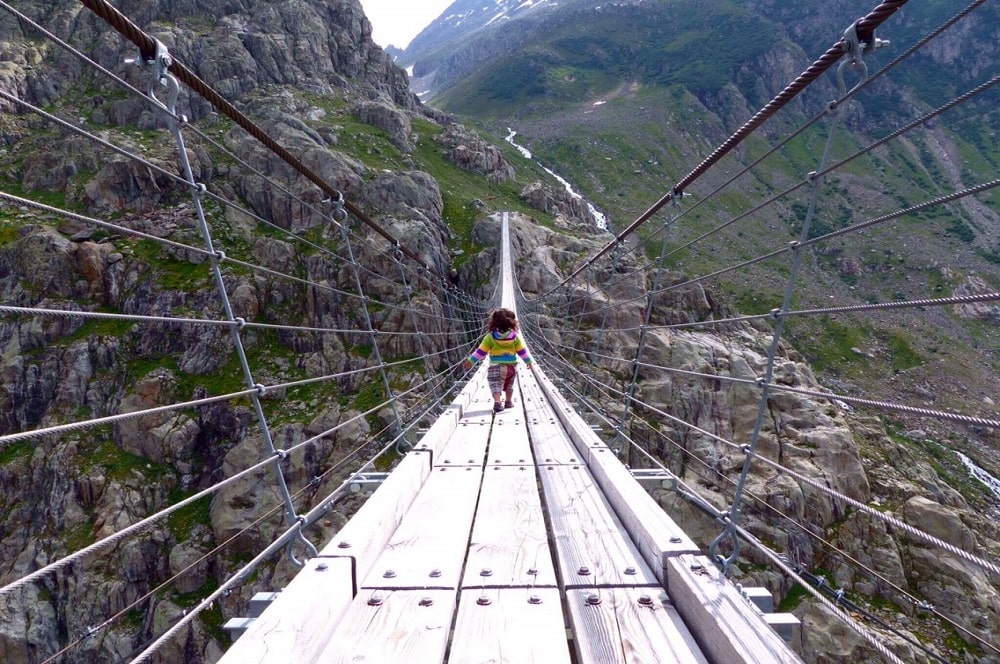 Trift Bridge, located near the Trift Glacier, is known as the longest suspension bridge of the Swiss Alpine, with a length of 170 meters. This bridge, which is crossed by about 20 thousand people who come to see the glacier every year, passes 100 meters above Lake Triftsee. We only have one warning: You may feel a little dizzy while crossing the bridge! 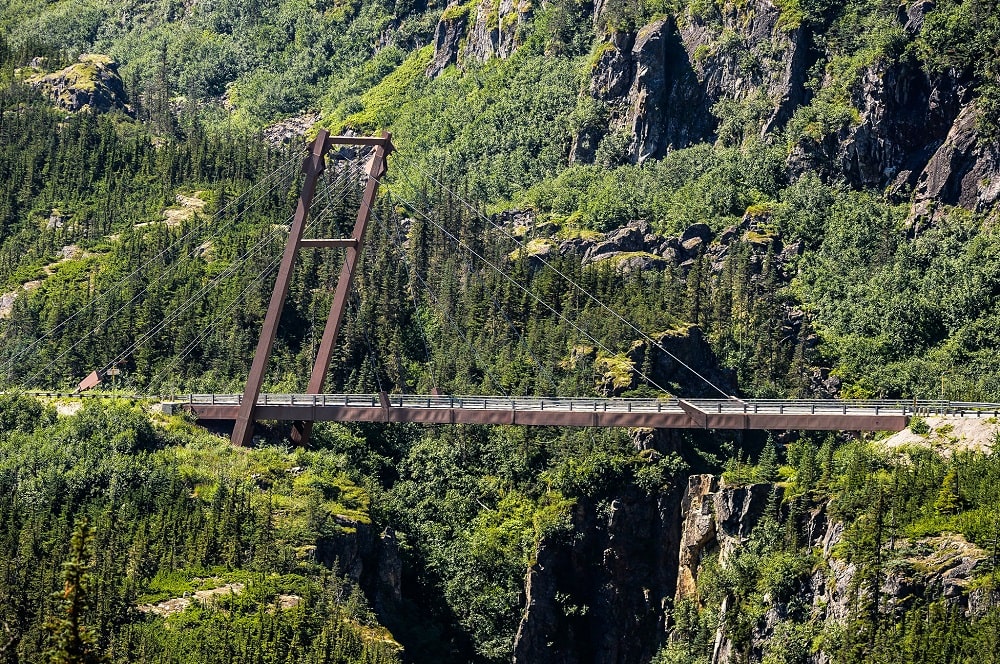 This bridge, which was built in 1976 and connects the Skagway city of Alaska to the Yukon highway network, seems quite safe at first glance, but it is not possible to be afraid when you look more carefully at the curved pillar of the bridge! Of course, if you want to cross this bridge by car, you have to hold your hand quickly. Because a concrete bridge will be built very soon to replace William Moore Bridge and the existing bridge will be used as a viewing terrace. 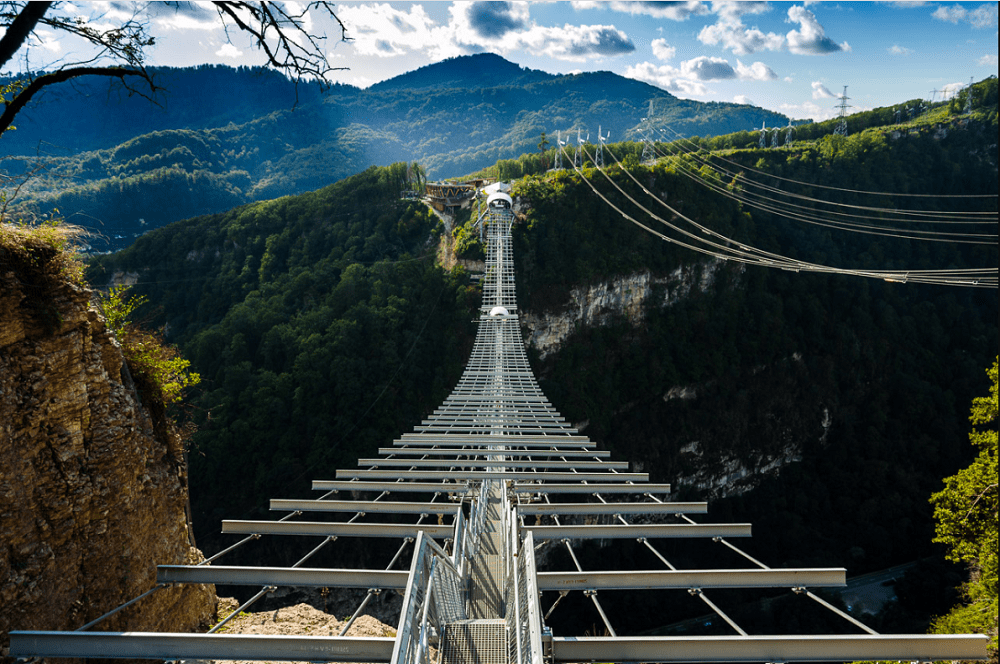 Skybridge in Sochi, which is the longest pedestrian bridge of the entire planet with a length of about one kilometer, passes through the Krasnaya Polyana Valley. The bridge offers different activities as well as its exquisite scenery. For example, you can take the fastest (70 km / h) cable car in the world, or if you have enough courage, you can do bungee jumping. 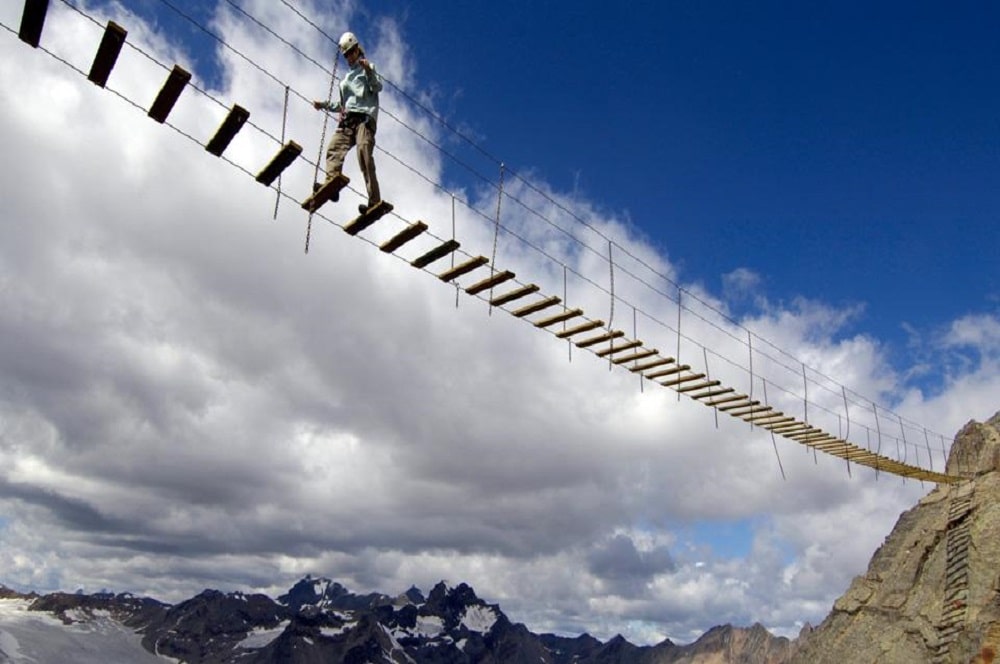 Would you like to run in the sky? You can get the chance to do this dangerous activity on the 60-meter bridge, which is made of several planks and steel ropes in Monte Nimbus and swinging like a swing. But of course, a helicopter flight, and then a mountain climb is waiting for you to reach the bridge. Say what? Could you dare? 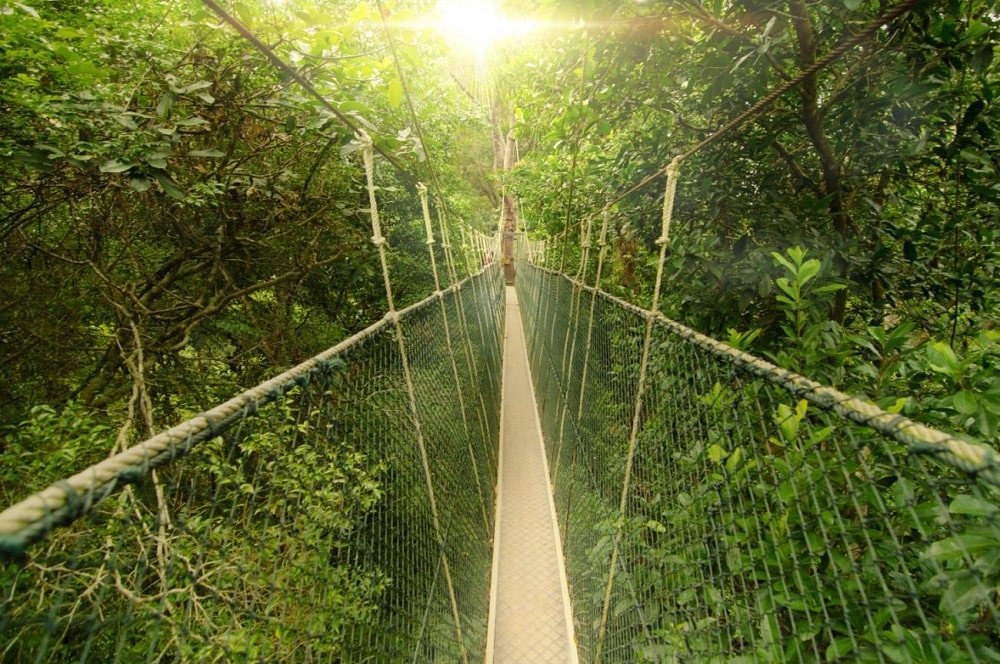 Although these bridges in Taman Negara, one of the oldest rainforests in the world, are no longer as high as before, the feeling of tension that they give when they walk on them continues. These bridges, with a total length of 510 meters, attach to trees that are almost over a thousand years old. While looking at the rainforest from above, be prepared to meet other inhabitants of the forest. 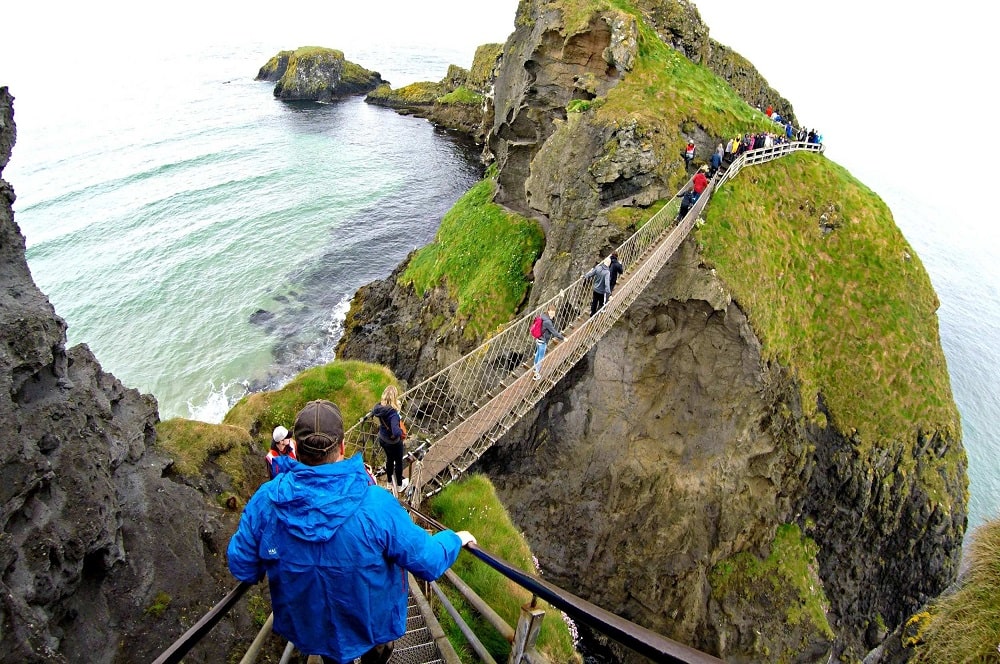 This bridge, which is about 30 meters high and stretches for 20 meters, provides access to the island of Carrick, where there is no settlement for about 350 years. Carrick-a-Rede Bridge, which was used by fishermen who used to hunt more salmon in the past, was replaced by a much more robust bridge that is currently in use when it was visited by more and more tourists every day. If you overcome your fear of heights and cross the bridge, exquisite views of the magnificent nature of Northern Ireland will be waiting for you. 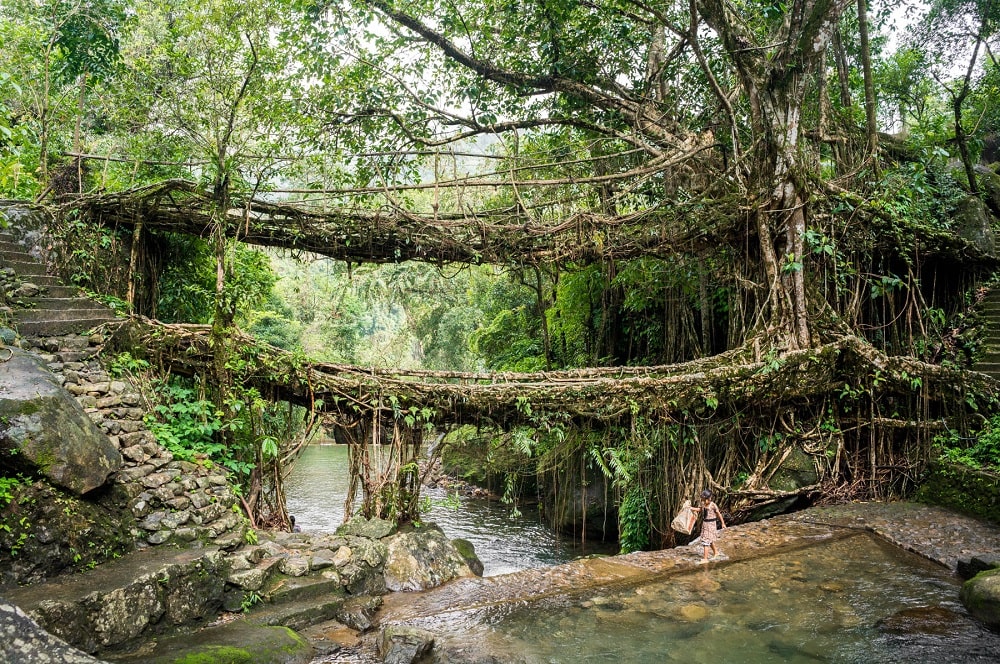 In the Meghalaya state of India, which is the world’s most rainy region, the locals have developed a very clever method for crossing rivers, resistant to heavy monsoon rains. Some of these bridges made of rubber trees are over 100 years old. Even if the people of Meghalaya are proud of their living bridges, which of us can we dare to go through these bridges made entirely of tree branches? 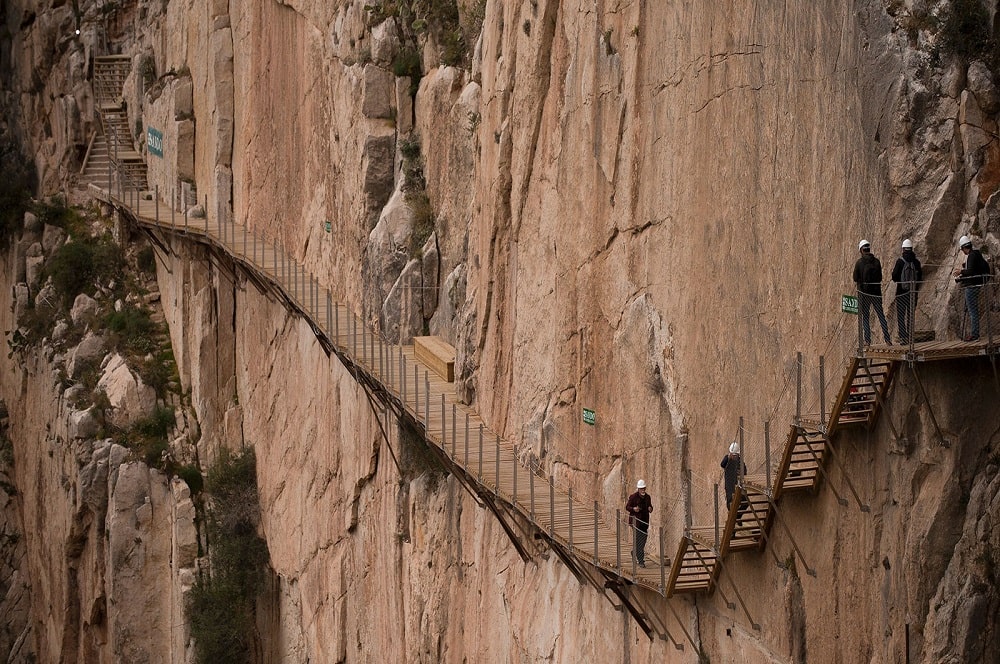 Caminito del Rey, a four-kilometer marked mountain road in the province of Malaga in the south of Spain, means “The Little Path of the King”. Although it was closed for a long time because of fatal accidents and risk posed before, this road, which was reopened in 2015, is considered the most dangerous road in the world. The bridge that crosses the Guadalhorce River on the route causes dizziness.