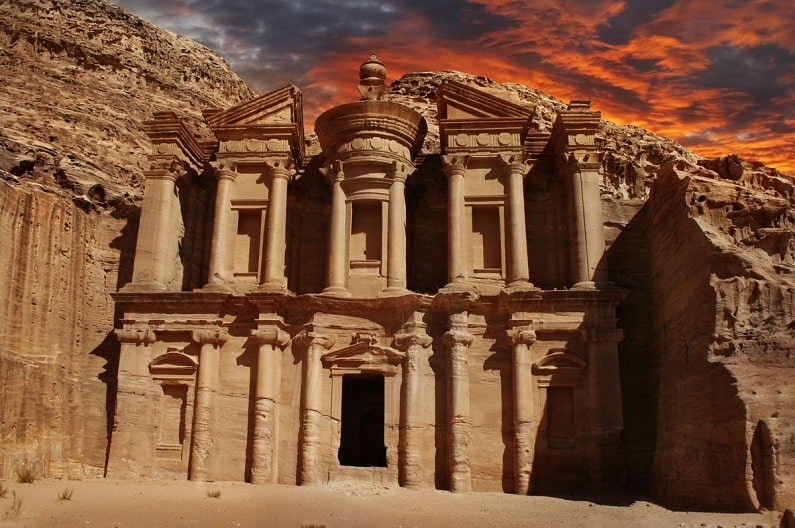 It’s hard to deny that one of the world’s most popular and mysterious ancient cities is Petra in Jordan. Petra, the “rose-red city” of the ancient Nabataean civilization, is located in southern Jordan and east of Wadi Araba, part of the Great Rift Valley, whose bird flight is about 133 km from the shores of the Gulf of Aqaba.

The 2,200-year-old ancient city, where theaters, temples, houses, and royal tombs are carved into sandstone cliffs with an aesthetic blending Eastern and Hellenistic architecture, is one of the most important legacies of not only Jordan. The spaces carved into the rocks, each a masterpiece of art, are admirable.

Hidden amidst the folds of magnificent hills, this unique area was unknown to Europeans until it was rediscovered in 1812 by Swiss explorer Johann Ludwig Burckhardt. One of the most breathtaking aspects of Petra is its colorful sandstone structure and wonderful architecture celebrated almost 150 years ago with the memories of a select few tourists.

It was included in the UNESCO World Heritage list in 1985. Petra, chosen as one of the New Seven Wonders of the World, is one of the most recognizable symbols of Jordan. This magnificent ancient city has been the scene of many movies. These include Indiana Jones: The Last Adventure, The Mummy Returns, filmed in 1989.