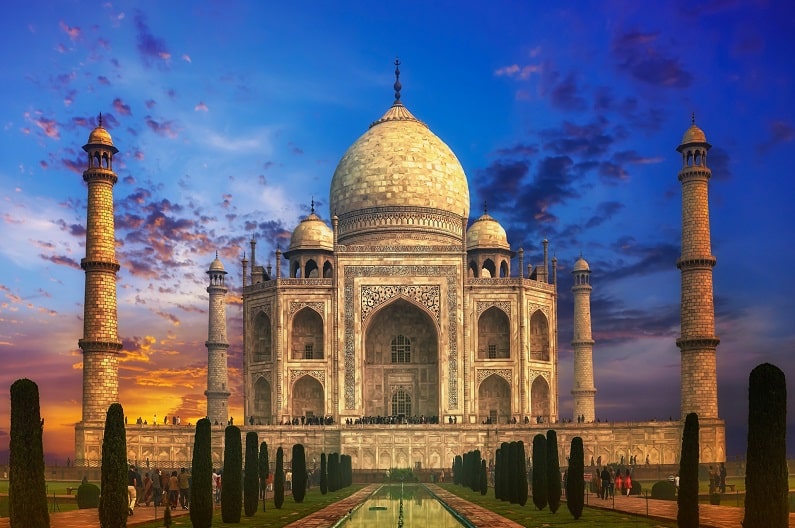 The Taj Mahal, which was built by the 5th ruler of the Mughal Empire Shah Cihan for his wife Ercümend Bânû Begüm, who died at a young age on June 17, 1631, in Agra, the capital of the empire at that time, houses the tombs of Mumtaz Mahal and the emperor Shah Cihan, who died in 1666.

This magnificent work is described as a symbol of the love between Shah Cihan and his wife Ercümend Bânû Begüm, as well as the power and might of the dynasty. According to the rumors; Ercümend Banu, who took the name Mumtaz Mahal after Shah Cihan ascended the throne, died while giving birth to his fourteenth child.

The ruler also tries to find solace in art and architecture by having a magnificent mausoleum built-in memory of his love for his wife. The mausoleum is comprised of a mosque and a guest house built as symmetrical structures on both sides, as well as structures from the monumental entrance gate. The ruler, who established a delegation of architects and masters for the construction of the tomb, assigned local Indian masters along with Ottoman, Iranian, Syrian masters and artisans.

Shiny white marble with fine blue veins was used in the construction of the Taj Mahal. The dome, which is made of the same marble and has a height of 82 meters from the ground, was completed in 1648. The tomb, which has a golden realm on its dome, has 4 minarets made of white marble.

In addition to many masters, the Taj Mahal, which is estimated to have 20,000 workers a day, has 42 emeralds, 142 rubies, 625 diamonds, and 50 very large pearls on its walls, which are buried with hundreds of thousands of agate, mother-of-pearl, and turquoise. The building, one of the new 7 wonders of the world, is an extraordinary masterpiece made for the sake of great love.

In the 1980s we lost many of the original punk dancers, and with them the traces of punking and waacking began to disappear. In 2003,…

6. Naked Cruise – Caribbean Bare Necessities, a Texas-based company, offers week-long cruises from Florida so you can travel the Caribbean in an ever-popular style.…