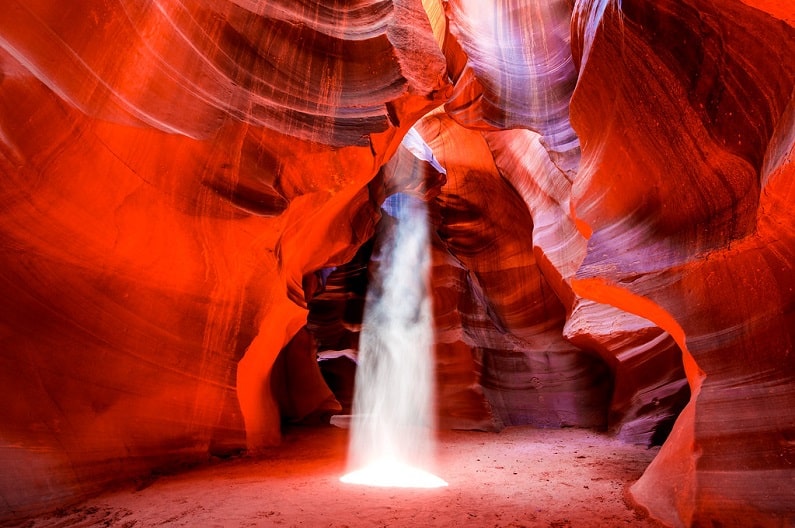 Antelope Canyon is a slot canyon located in Navaho, eastern Arizona, USA. The canyon, which resembles a monumental sandstone sculpture, is divided into two separate parts, called the Lower Canyon and the Upper Canyon, due to erosion. The reason why the canyon is named “Antelope” is because antelopes lived in the region before the Europeans discovered America.

The Navaho name of Upper Antelope Canyon is “Tsé bighánílín”, which means “where water flows through rocks”. The name of the Lower Antelope Canyon is Hazdistazí, “spiral rock arches”.
Antelope Canyon is a natural formation highly sought after by travelers and photographers. It is also a source of income for the Navaho people. However, canyons can only be visited with guided tours, it is not possible to visit independently. The reason for this is that the rains that fall during the monsoon season can quickly cause a raid on the canyon.

It is also possible to book private tours on the days when the daylight is at its peak. In these special tours, small groups of 6 photographers are formed on average and 2 hours are given to the visitors participating in the cruise tours, while an additional 1 hour is given to the photo tour participants. Upper Antelope Canyon is mostly visited by tourists as it does not require climbing and is at ground level.

2. Naked Yoga – New York, USA A new fashion, nude yoga has been practiced by religious people in India for centuries. True to its…