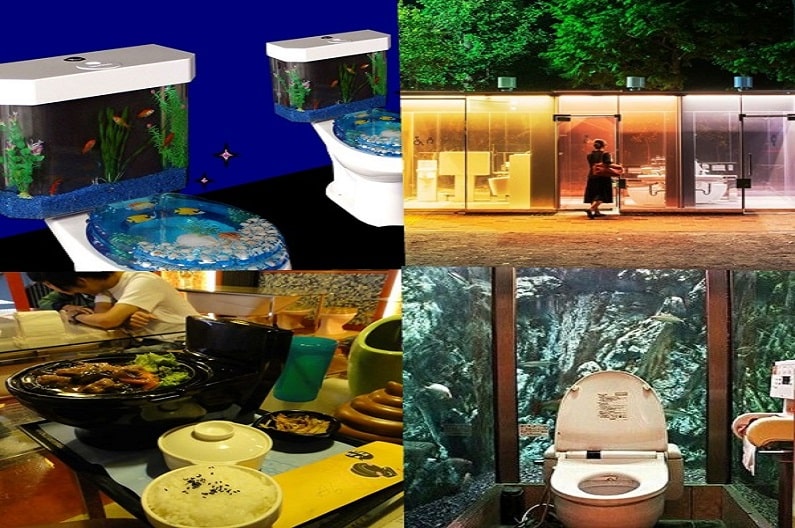 Toilets are important places where many people relax, sometimes even escape, where humane needs are met, and where hygiene is sought abundantly. However, some of the toilet designs we encounter, especially in public places, almost frighten us.

Don’t be surprised if you come across it on a trip one day and have to use it. Discover the world’s weirdest, and some even perfect, toilets! 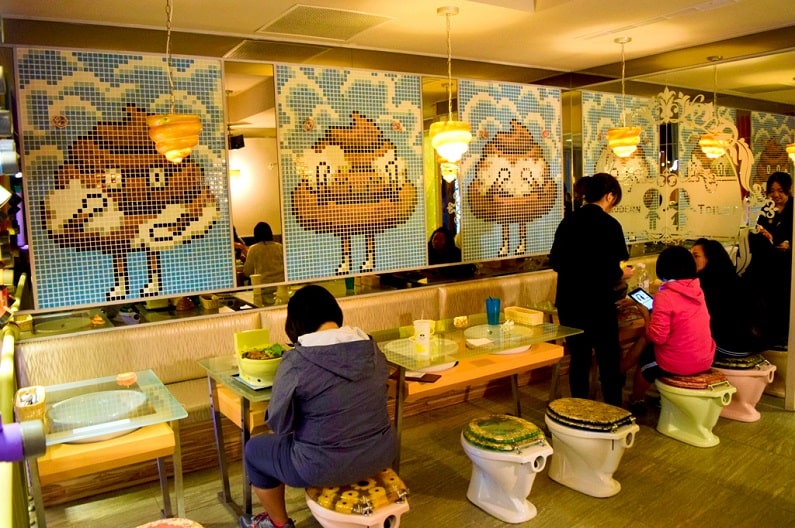 Imagine a mind-blowing restaurant in Taipei; instead of chairs, customers sit on the toilet (fortunately with the lid closed) and use the glass-enclosed sinks as tables. The interestingness does not end there! 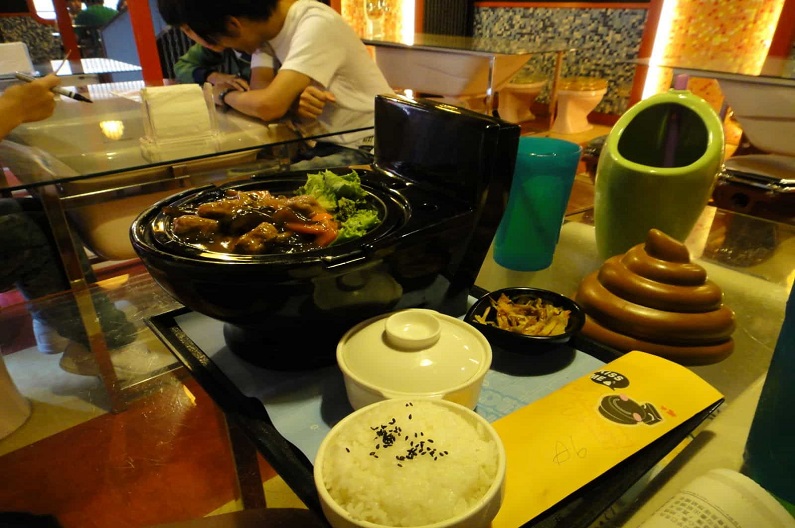 Meals are served on toilet-shaped plates. They also have an ice cream called “Mr. Whippy” for dessert, which is the ultimate in humor! A restaurant that should not be visited by those with sensitive stomachs. Despite all this toilet talk, we can say that it is a place where local people and tourists flow like crazy and attracts great attention. This amazing interior design that makes a difference has definitely pushed the limits!

2. Toilet with a View – The Shard, London 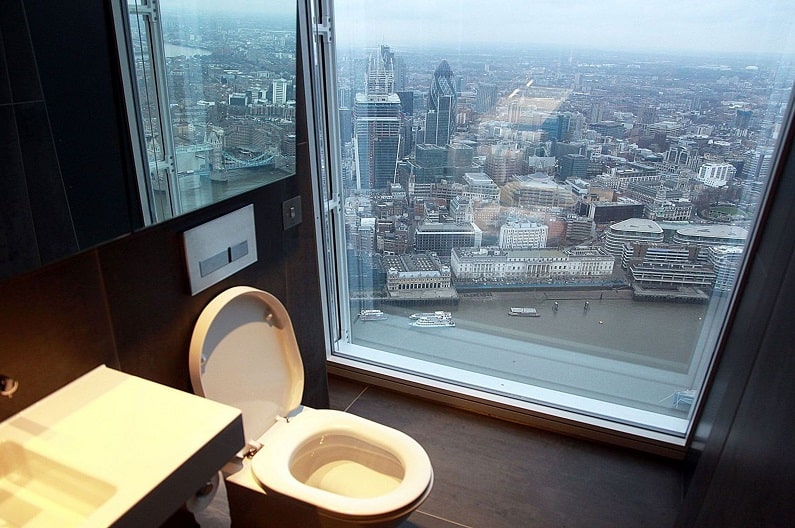 The Shard, one of London’s skyscrapers, continues to be frequented by visitors who want to see London from a bird’s eye view from a height of 245 meters since its 68th floor opened to the public.

One of the points where the view is the best is the section where the toilets are. It can be a very strange but different experience for those who want to satisfy their needs while watching the panorama of London. 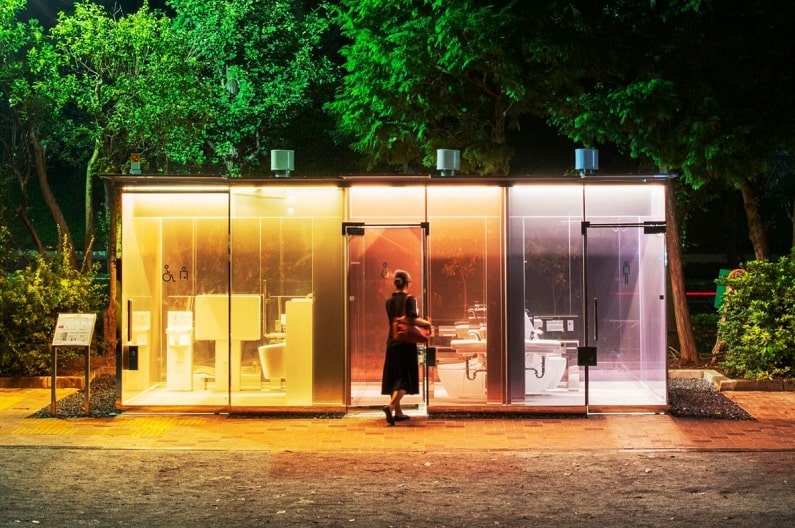 Japan is always known for its advanced technological accumulation. In addition, it has been attracting attention with its high-tech toilets for a long time! They have toilets that can play music, heated seats, and even talk to you. 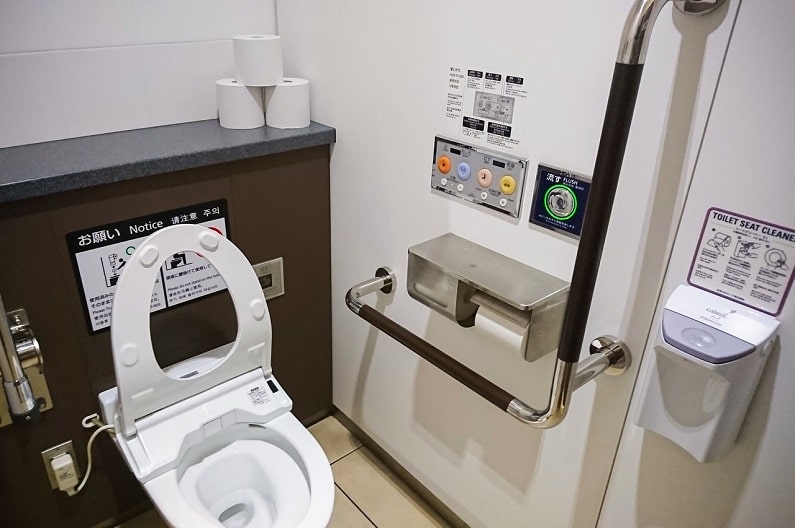 Using the control panel may seem a bit complicated at first, but once you find the squirt and flush button, the rest is easy. You can find this type of space-age toilet in any modern hotel or shopping mall in every city in Japan. 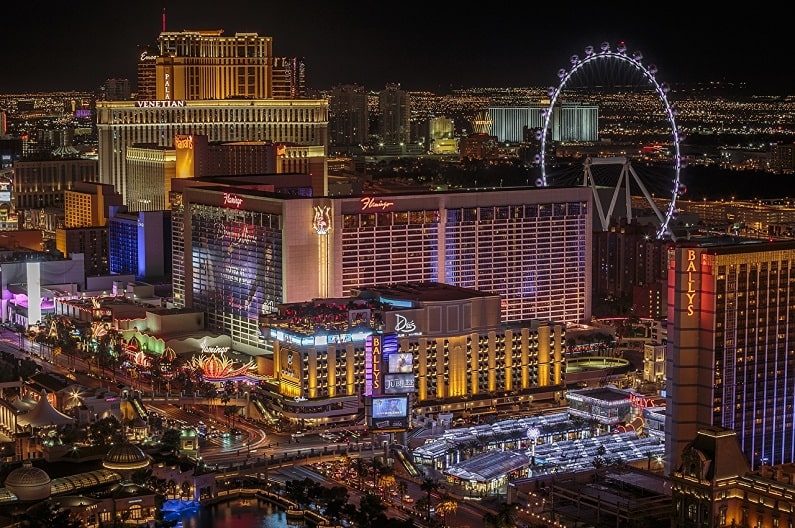 If you think that the nightclub called Mix Lounge, located on the top floor of the Mandalay Bay Hotel in Las Vegas, is famous only for its cocktails and great menu, you are wrong. The toilets of the place are also admirable with their decoration and view. 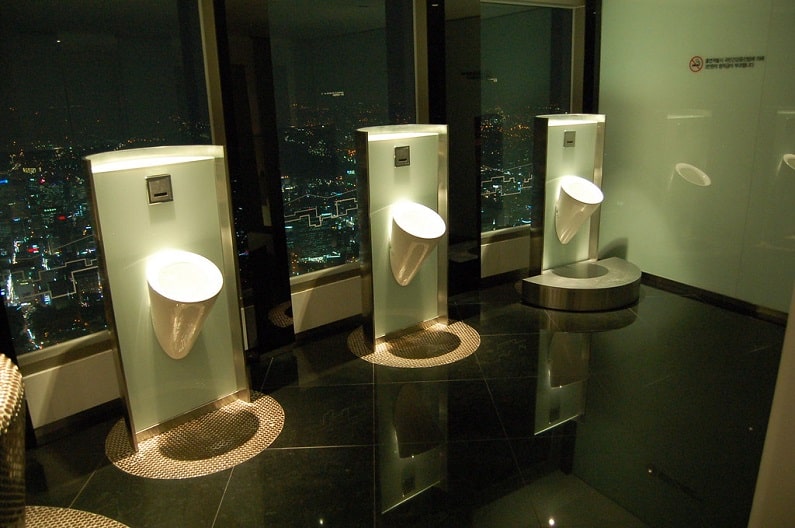 If you take a short expedition towards the toilet, you can enjoy stunning views of Sin City from each glass pane of the floor-to-ceiling glass-enclosed toilets. Before traveling to Las Vegas and taking a helicopter tour to see the city, visit the restrooms on the top floor of this 43-floor hotel. Maybe you’ll stop paying that much for a bird’s eye tour of Las Vegas! 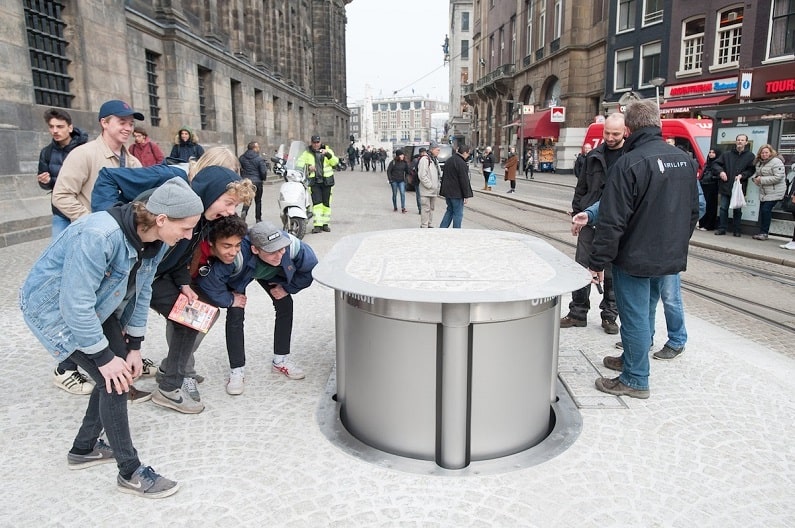 The toilet application that ends from this place, which you can come across in various cities in Europe, is a very futuristic approach. These toilets, called “Urilift”, are mostly revealed when it gets dark. 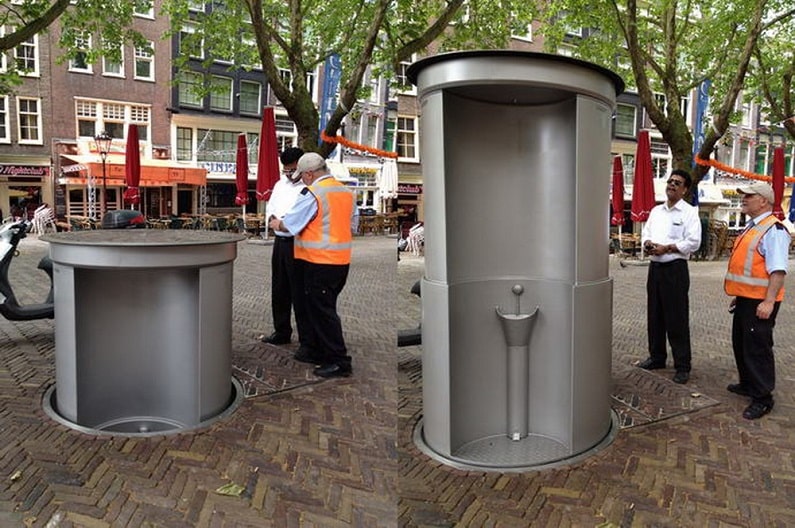 These urinals, which are designed to prevent men from urinating at night when they cannot find a toilet, return to the ground with daylight. While walking on the road, don’t be surprised if you see something like a tube coming out of the ground out of nowhere. It’s not a spacecraft, Urilift! 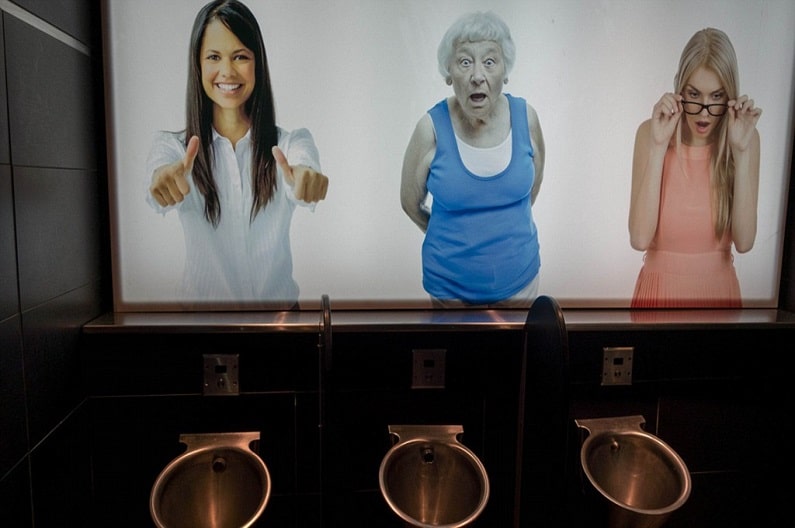 These so-called confidence-boosting urinals at the Sofitel Hotel in Queenstown, New Zealand make other men feel very safe and friendly as they stare at this very ominous wall. 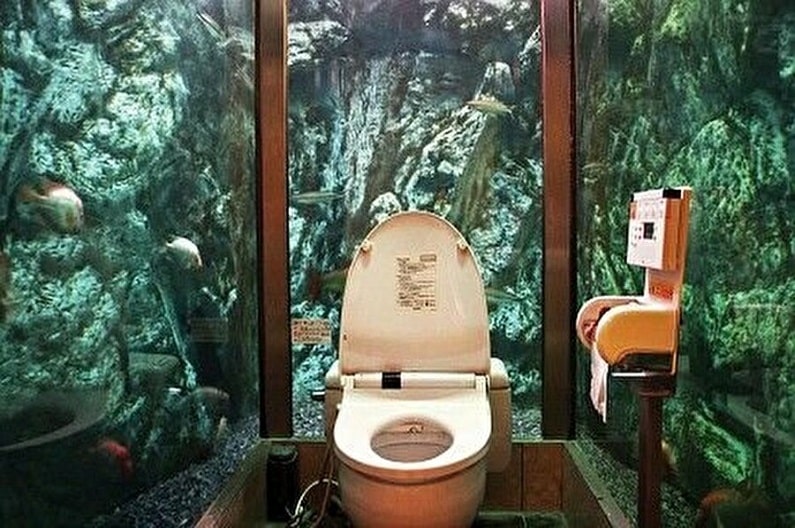 Hippo Papa Cafe in Akashi, Japan has been a source of attraction for visitors and more recently Instragam users for entirely different reasons. The owner of the cafe reportedly spent £200,000 to install a toilet surrounded on three sides by exotic fish and a male turtle! 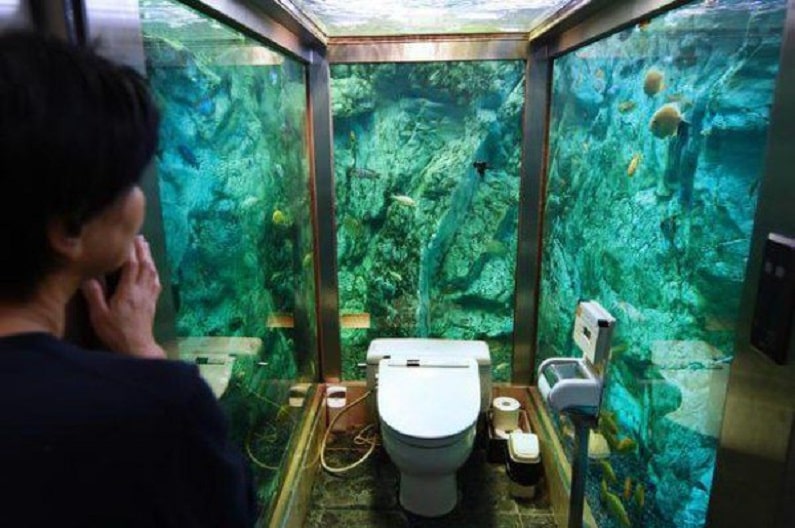 The toilet, which the owner built to attract the attention of social media, seems to have worked because people are constantly sharing his pictures. 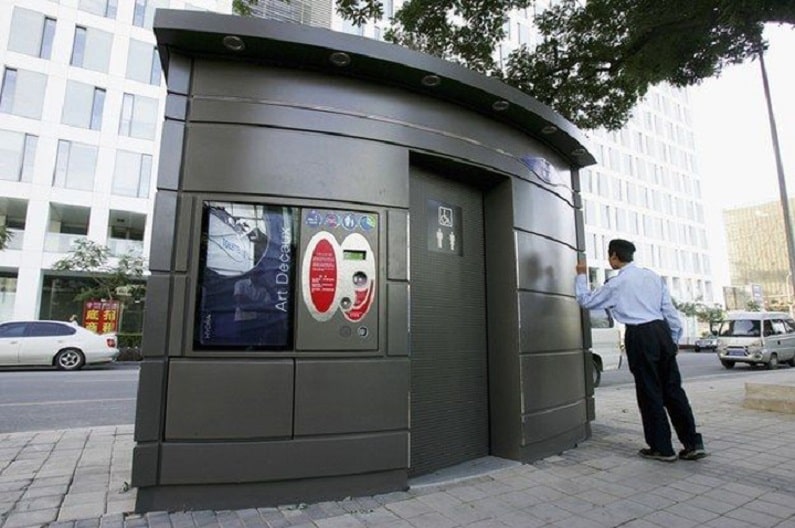 Weighing 15 tons (30,000 kilograms) and measuring 30 centimeters thick, the high-priced A Bulletproof Toilet was recently unveiled to the public in Beijing’s Zhongguancun Square. It is among a series of public safety products to counter terrorist attacks in the wake of the 9/11 attack in the US. The toilet is reportedly able to withstand the explosion of common TNT explosives without harming people outside.

, 2006, The Fish ‘n Flush two-piece aquarium toilet tank was conceived as a source of entertainment and conversation and has garnered serious mainstream media attention since its release. First of all, let’s make it clear that the fish in the aquarium are not in danger of frying. 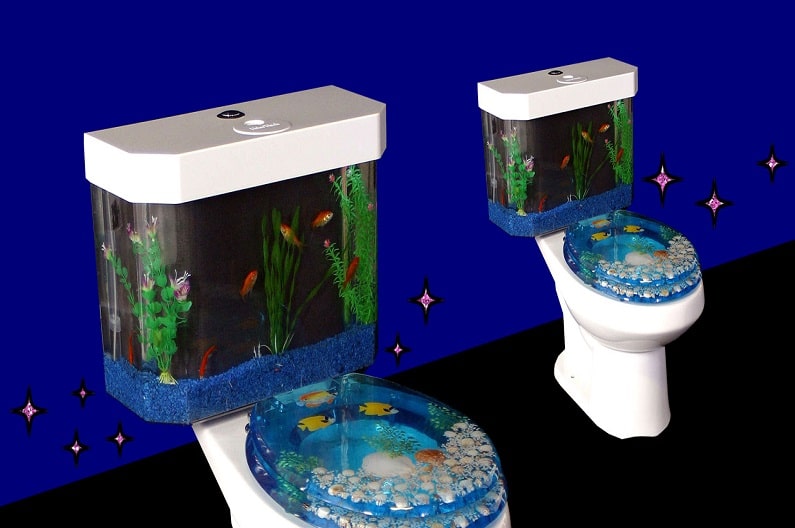 The Fish-n-Flush is a two-piece aquarium toilet tank with an aquarium surrounding a transparent inner tank. The custom tank inside a tank retails for $400 and comes with everything but water and fish.

***You may be interested in; 10 Most Beautiful Bridges You Must See in Europe 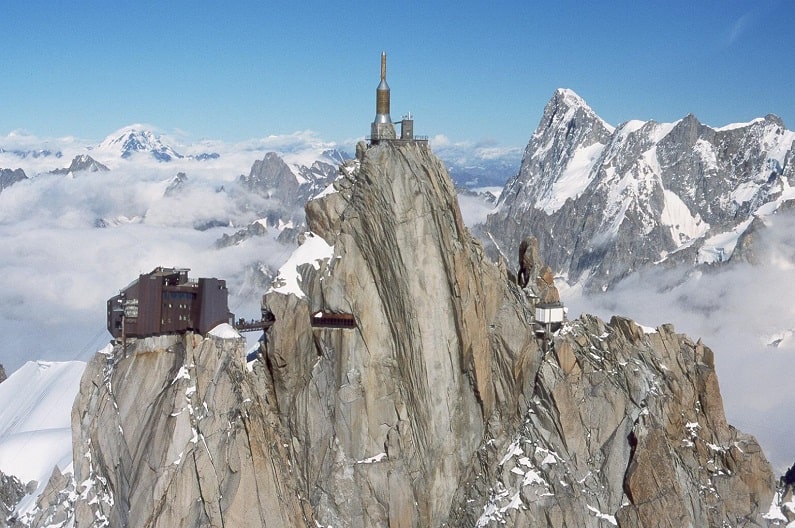 With a height of 4,810 meters, Mont Blanc, the highest mountain in Western Europe, was once one of the peaks that mountaineers were most eager to climb. Private toilets at the top of the mountain are designed by the French company Ecosphere Technologies to be suitable for the cold and dry weather conditions of the mountain. 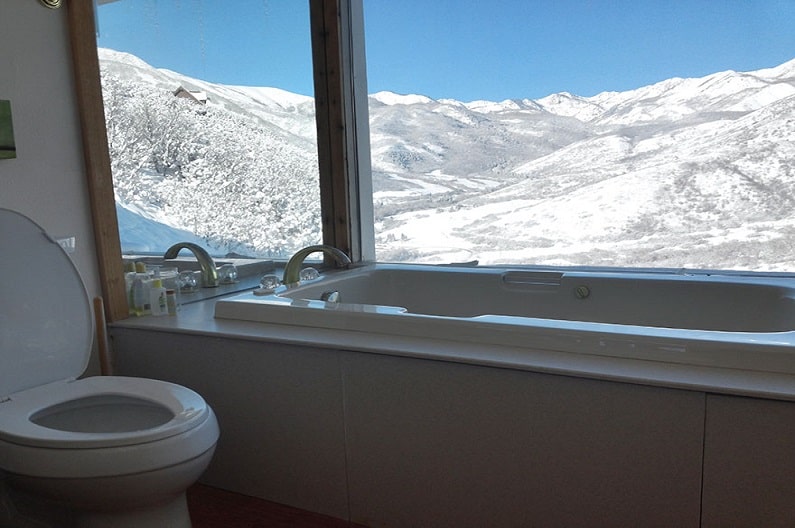 Considering that 145,000 euros were spent to install this toilet system on top of the mountain, it should be quite an impressive system. If you want to meet your needs at the end of your climb, do not forget to have a few penny coins with you!

***You may be interested in; The 15 Most Beautiful City Parks in the World